The handwritten note in the scrawl of a child said it all: "Ginger is a good dog." Employee Isha Willits found the message affixed to the dog's kennel in L.A.'s Baldwin Park Shelter, where she had been left by her people. In all the years Isha has worked at the shelter, she has never seen a message left for a relinquished dog's potential adopters. The note explained Ginger was left because her family was moving into an apartment. It also said she was great with kids, and that she did tricks. 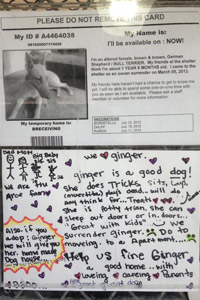 Things could have been dire - not every dog gets adopted out of the shelter system - but luckily for Ginger, she was slated for Best Friends' Pup My Ride program. "Everyone here looks forward to the day of a Pup My Ride transport," shares Isha. "In this business, it's easy to be discouraged and lose hope, but knowing that those animals are on their way to new, loving homes almost lets us see a glimmer of light at the end of the tunnel. Robin Harmon (Pup My Ride coordinator) has found a way to bring hope and joy to thousands of homeless pets like Ginger, and to us as well."

On the road to German shepherd and Belgian Malinois rescue group

Pup My Ride pulls small, often purebred (or "designer") dogs, by the dozens out of the Los Angeles city shelter system (where Chihuahuas and the lot are often killed) and moves them to rescues and shelters across the country, where there are often few small dogs available and where they are more easily adopted out.

Ginger isn't quite as small as a Chihuahua, but she is distinctive - she is a Belgian Malinois. In addition to helping small dogs, the Pup My Ride program also works with breed rescue groups to place dogs of every size. Luckily, there was a rescue in Montana that had room for this abandoned girl.

Stephanie Trollope of Montana German Shepherd and Belgian Malinois Rescue has been rescuing working breed dogs for years. She understands their needs and spends extra time getting to know each of the dogs before finding them placement. She's seen an upswing in the number of bigger dogs needing rescue.

"Many people are misinformed about what makes German shepherd dogs and Belgian Malinois dogs tick," says Stephanie. "People sometimes get them and think they'll be great guard dogs and throw them in the backyard. These are sensitive dogs that need to keep their minds active and their bodies exercised. They don't just train themselves."

Stephanie loves working with the Pup My Ride program. Her rescue has been a receiving group for quite a few years. "Pup My Ride has been awesome," says Stephanie. "Gayle Alexander (who drives the Pup my Ride van) has just been wonderful for work with. It just all goes so smoothly."

After Ginger arrived, Stephanie took some time to get to know her. Stephanie determined Ginger was highly motivated and had a strong play/prey drive. Stephanie evaluated Ginger's placement options.

"Ginger is now a drug detection dog with a compassionate law enforcement officer in Billings," shares Stephanie. She explains Ginger's new life will be by the side of her new dad, morning, noon and night. "She'll be part of his family, a cherished member of his household, and during the day, she'll have an important job to do. This is the perfect fit for this special dog."

Stephanie is thrilled with the placement and excited to be part of the solution. "For every dog we place, it opens up room so we can save another," she explains.

Pup My Ride goes the extra mile. "The best part of the Pup My Ride program is being able to follow a dog's story from her stay in an overcrowded shelter to her happy ending," says Robin Harmon, Pup My Ride coordinator. "The kids left their phone number on their written message on Ginger's kennel, and we are going to call them to let them know about Ginger's new life."

For more information on how you can help animals in Los Angeles, go to the NKLA website.