Image
Volunteer Dee Willner buys a home in Kanab, Utah, near Best Friends Animal Sanctuary to be able to be close to and work with the shy dogs she loves.
By Jennifer Hayes 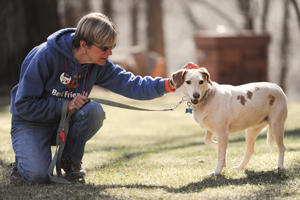 Shy dogs like Zena inspire Dee Willner to volunteer. In fact, now that she’s retired, she’s dedicated her life to helping animals by spending half the year volunteering at Best Friends.

A longtime Best Friends member, Dee first visited the Sanctuary in 2009. Though she helped with horses and pigs, she felt most connected to the Dogtown residents. From that first visit, she was hooked and has been coming out to volunteer every year since. But even that wasn’t enough.

“I wanted to be here more often,” says Dee. “Coming out a week at a time just wasn’t doing it, because by the time I got back home, I already wanted to come again.”

So in 2013, Dee took a big leap and bought a house in Kanab, Utah (the small town just six miles from the Sanctuary), so she could spend every winter with the animals. With fewer volunteers during the winter, Dee is in high demand. She helps with dog walking, cleaning, feeding and even filing adoption paperwork. But her favorite part is one-on-one time with the dogs, including those who need her most. Dee says, “Shy dogs are what I like best.”

Taking a shy dog for a ride

Though most dogs love to go on car rides, Zena is not most dogs. She’s so shy that something as simple as a little drive is a huge undertaking. So volunteers like Dee are especially appreciated, because they make it possible for dogs like Zena to get out and about more. 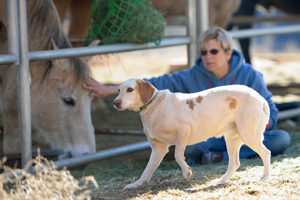 Dee often takes Zena on short drives, going a little farther each trip to stretch Zena’s limits, familiarize her with a car and help her become more adoptable. They’ve driven almost all the way from Dogtown to Horse Haven, a distance of about a mile and a half. That’s a great route for Zena because she loves to stop and look at the horses.

Dee’s goal is to drive Zena all the way to the Welcome Center, which is slightly more than three miles from Dogtown. “We’ll have done well when that happens,” says Dee.

Another dog who Dee has befriended is Dirk. The rescued sled dog didn’t get much socialization in his prior life, making him even more timid than Zena. But Dee is doing her best to help him. For instance, she’s helping him get more comfortable with people by sitting and talking to him in his kennel. When she first started, he tried to intimidate her by barking at her. Dee called his bluff and now the two have become pals.

However, Dee wanted to provide a friend for Dirk to remind him of her even when she’s not around. She knew that Julius, another dog at the Sanctuary, has a kennel filled with stuffed toys that help provide him with a sense of security. Dee hoped that Dirk might find the same kind of comfort, so she went out and bought Dirk his very own huge stuffed dog. But Dirk made it clear that the gift didn’t remind him of his friend Dee. “Dirk did not appreciate having a roommate,” says Dee. But her effort didn’t go to waste. Julius will surely love the big stuffed dog meant for Dirk.

Best Friends is a huge part of Dee’s life. She arrived in December and will remain until May, when she’ll head back to North Carolina, where she volunteers with Charlie’s Angels Animal Rescue, a local group in Fletcher, North Carolina, near her home. Until May, though, Dee is volunteering with the shy dogs at the Sanctuary, celebrating every small bit of progress.