Best Friends volunteer from the Land Down Under

Image
Despite obstacles, Australian volunteer makes her way to the Sanctuary to work with the animals.
By Jennifer Hayes

Imagine coming to America for the first time from another country. Where would you go? For Sarah-Jane Wicksteed of Perth, Australia, the answer was simple: Best Friends. However, her trip to the Sanctuary proved quite an ordeal, but after some time with Bentley the dog, it all melted away.

Before coming to the Sanctuary, Sarah-Jane began to feel ill. She still planned to visit the Grand Canyon, but the national park was closed due to the government shutdown. To circumvent the blockade, she even scheduled a helicopter trip, but it was too windy. Then the shuttle she hired to transport her to Best Friends had to drive an extra 400 miles around the national park because of the closure. Upon arrival, she discovered she had been robbed, her international driver's license among her stolen items. Without that license, she could not rent a car in Kanab.

Most folks would have given up, but not Sarah-Jane. Luckily, she befriended a kindhearted intern willing to drive her to and from the Sanctuary each day. And though she missed her first day volunteering, she persevered.

Connecting with all the animals at the Sanctuary

She was rewarded for her determination. Sarah-Jane witnessed snowfall for the first time. "It was magical," she recalls. "We don't get snow in Western Australia." Not expecting such a delight from Mother Nature, she improvised, wearing a clean garbage bag for protection from the elements.

However, Sarah-Jane came to Best Friends for the animals. She felt at home volunteering at Parrot Garden, enjoying the company of the cockatiels, a species native to Australia. Yet her real affinity is for the pooches, so she spent plenty of time in Dogtown, where she immediately connected with Bentley. 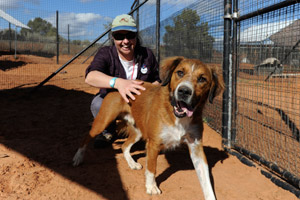 You see, Bentley stumbles when he walks and has problems seeing. He recently came to Best Friends from a shelter in Vermont after surviving canine distemper, an often deadly virus that affects the nervous system. He's truly lucky to be alive, though his movements can be stiff and awkward.

Sarah-Jane can empathize. She has multiple sclerosis, a condition that also affects the nervous system. Plus her vision suffers, following a recent neurological attack on her right eye. Obviously she doesn't let it slow her down. However, sometimes people don't understand the symptoms and misread her - just like people can misread Bentley, until they realize he has a neurological disorder. Sarah-Jane instantly knew a kindred spirit and was drawn to the dog who, despite his impairment, takes delight in everything he does.

"I know people who have health issues and a 'poor me' attitude," says Sarah-Jane, who cherishes her memory of taking Bentley for a walk. "Yet I see this beautiful dog getting out there, walking around, sniffing, and enjoying his life."

Thoughts of Bentley inspire her to do more.

Giving back to shelters in Perth, Australia

"It has been a wonderful experience," says Sarah-Jane. "I'm very glad that I made the trip and really hope that I can make more of it when I get home."

So she's got a plan. Sarah-Jane loved the concept of Tara's Run, the dog training/agility building at the Sanctuary. So she's planning to contact two of the local shelters in Perth, Australia, to see if they have something similar. If not, she wants to help make it happen. And based on her determination shown during her trip to Best Friends, she will.