Best Friends volunteer wins the hearts of the animals

Image
Volunteer Dan Lichtenstein wins the hearts of shy animals and especially enjoys connecting with horses, whom he describes as sensitive and dignified.
By Christelle L. Del Prete

"This is the most rewarding and meaningful work I've done in my life," says Dan Lichtenstein in his quiet, understated way. This comes from a man who has had many successes during his career as a one-time Citibank employee in Manhattan, and a long-time freelance writer. But for Dan, it is all about the animals.

He'd been living and working in L.A., but had grown tired of the hectic pace and wanted to retire. Surfing through the TV channels one day, he came across the National Geographic show "DogTown." Dan had heard about Best Friends previously, but the show augmented what he already knew. He became intrigued by the quality of animal care at the Sanctuary, and by the beautiful landscape of Kanab, Utah. He thought it might be the perfect place to retire, but figured he'd better visit the place in person first.

So in April 2012, Dan came to Best Friends to volunteer for three days, and to get a feel for the Sanctuary. Because he is a dog lover (he has a mutt named Radar and a German shepherd named Reggie), he pictured himself moving to Kanab, walking dogs three or four times a week, and spending time with some puppies. 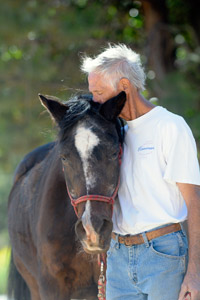 Captivated by the sensitivity and dignity of horses

Falling in love with horses was not something he had anticipated, but he became absolutely captivated by them, he says. To Dan, horses are "beautiful, dignified, sensitive creatures, each with his or her own personality." He appreciates the gentleness and wisdom he sees in them, and will often watch, spellbound, as the magnificent animals chase each other across a pasture.

It seems that equines, especially the shy ones, are equally drawn to Dan. Perhaps it is because he himself has such a calming, sensitive air. Jake the mule is one example. When he first came to Best Friends, he didn't want to be around people. He was even a bit resistant and uncooperative. But one day, after Dan had moved to Kanab to become an official Horse Haven (and Puppy Admissions building) volunteer, Jake decided he liked him, and began following him around.

A couple of weeks later, while Dan was grooming a horse named Roy, Jake approached him. Very slowly and gently, Dan began brushing Jake. That grooming session lasted an hour. Now Jake enjoys regular groomings, during which he will rest his big, heavy head on Dan. Don Juan (aka Donny or DJ), a donkey who had been neglected and sold at an auction before coming to Best Friends, also wasn't fully comfortable with human handling. But he not only allows Dan to groom him, but will also follow him and ask for more when Dan stops.

Love and gratitude from a Rottweiler 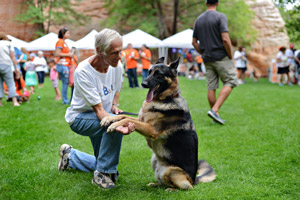 Even Marly (who is not a horse but a Rottweiler) has completely taken to Dan. Marly came to Best Friends with a litter of nine puppies. She lets Dan come into her run, even while her puppies are nursing. Dan says that it "feels so good to give her love," and that spending time with her and the pups is like getting a "love hit for the week."

Dan isn't looking for recognition or praise. In fact, he'd prefer to remain "invisible" and to focus on the animals. But he is grateful for the gratitude that is shown to him. Not only has he won over some of the shyest animals, but the staff at Best Friends have also shown him much warmth and appreciation. He said that it is "so good to hear" it when Jen Reid, manager of Horse Haven, thanks him. And he has become fast friends with Ron Jones, a volunteer coordinator and caregiver in Horse Haven, who says, "We appreciate all of our volunteers, and as for Dan? In Horse Haven, we absolutely love him. Dan rocks!"