Image
One animal lover finds the perfect way to ask his girlfriend to marry him. Read on to find out more about the best wedding proposal ever.
By Christelle L. Del Prete

Chris Walton has spent some of the most memorable moments of his life volunteering with homeless pets. It all began five years ago when he came to Best Friends for the first time with a group of students from the University of Illinois. His experience at the Sanctuary was so special to him that when he approached one of the most important moments in his life, he knew it had to take place at Best Friends.

Spring break trip to volunteer with animals at Best Friends

It all started back when Chris was helping to organize an alternative spring break adventure with his fellow students. They chose a trip to volunteer at the Sanctuary in Utah, and while he didn’t know it at the time, it would end up changing the course of his life.

Chris’ group spent a week at the Sanctuary, visiting all the animal areas, including Dogtown, Cat World and Horse Haven. The students also met with a few of Best Friends’ founders and learned about Best Friends’ initiatives and outreach work to end the killing of pets in shelters across the country. The trip had such a positive effect on the students that the University of Illinois has been sending students to Best Friends ever since.

Now graduated from the university, Chris planned a return trip to the Sanctuary. And his second visit proved to have even more impact on him than the first.

Sharing the magic of the Sanctuary 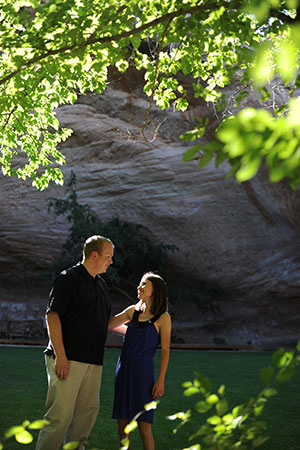 While a trip to Best Friends was plenty to be excited about, Chris had another reason to look forward to his Sanctuary volunteer trip. He’d also asked his parents to come, and he made the trip to Kanab, Utah, with an engagement ring stowed away in his luggage. He planned to pop the question at the most special place he’d ever been to.

Even though it must have been nerve-wracking to wait, Chris wanted his family and Lauren to get to know and love the Sanctuary, just like he had, before he proposed. So, instead of worrying too much about asking his future wife to marry him, Chris got to work with the animals.

Volunteering, and a perfect wedding proposal

The family spent their first day helping out in Dogtown. Chris says, “Volunteering there was probably our favorite experience — getting to work and interact with so many of the dogs, especially at the puppy preschool.” But it was an adult dog named Rosebud who really stole Chris and Lauren’s hearts. The couple took her on a sleepover on the first night of their trip, and that sleepover became one of the highlights of the trip for Lauren. “She was the best dog ever, except for being a bed hog,” Lauren says with a laugh.

The next morning, shortly after returning Rosebud to Dogtown, the family took a detour to Angels Landing, an especially pretty spot at the Sanctuary. Chris popped the question, and Lauren said yes.

There were happy tears all around, of course, but the family didn’t waste any time getting back to the other reason they had traveled to Best Friends. They headed to Cat World and got to work.

Maybe they were especially giddy that they’d soon have a new daughter in-law, but Jacqui and Bob, Chris’ parents, found their niche in Cat World. Bob wasn’t always a cat person, but he became the official cat cuddler that day, welcoming any cat who rushed over to claim a space on his lap. Meanwhile, the rest of the family did the equally important job of cleaning.

A rewarding trip, by all accounts

Back home in the Chicago area, the Waltons are still talking about their trip and the great experience they had at the Sanctuary. Chris says, “(Lauren and I) both feel that being at Best Friends made the most special moment of our lives that much more special.” He hadn’t wanted to propose to Lauren anywhere else, but it was also a rewarding trip for all the other reasons people like to volunteer at the Sanctuary. What are those reasons? As Chris says, “having a great vacation but doing something meaningful by volunteering at Best Friends, and being surrounded by so many amazing animals and people.”

Now, Chris feels very much the same way he did after his first trip to Best Friends. Though he’s not sure when, he knows that there will definitely be another trip to the Sanctuary in his future. And, if his past two trips are any indication, it is sure to be a memorable one.