Image
Big Rottweiler may have a tough exterior, but he's helping people to look past that by showing them just how loving and lovable he is.
By Christelle L. Del Prete 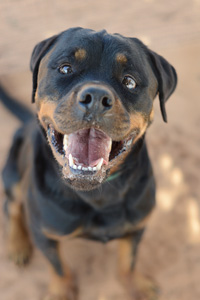 Have you ever met someone who comes on too strong at first? Maybe the handshake is rough or the person stands too close during conversation. Marias is the canine version of that person. When Marias greets people, he likes to run straight up to them to say “HELLO!” And unless you know him, you’ll most likely want to get out of the way (fast) because he’s 90 pounds of energy headed toward you like a freight train.

Marias’ size and appearance have been working against him for a long time. He was surrendered to a shelter in Montana when his person had to move and couldn’t find a landlord willing to rent an apartment to someone with a large, rough-and-tough-looking Rottweiler dog. But while it’s true that a dog of Marias’ size and energy level isn’t for everyone (and that he probably wouldn’t be happy in a small apartment), he’s been spending time lately with new people who are helping him learn that sometimes a softer greeting is the best way to make new friends.

One of Marias’ most helpful new friends comes from an unexpected place — Best Friends’ horse department, Horse Haven. Rosalie Wind spends her working hours there with horses, pigs and goats, but lately she’s been spending her lunch hour with Marias, to help him learn how to greet people in a way that’s a bit less scary to them. Rosalie is the perfect person to do this, because she wasn’t used to big, rambunctious dogs. She grew up with cats, and her expertise is in working with species more likely to run from people, rather than toward them.

So when she first met Marias and he rushed right up to her and pushed his Jolly Ball toy at her in his usual excited, insistent way (his version of an invitation to play), she wasn’t quite sure how to respond. “Because I’m an introvert, I tend to shut down and leave situations that make me feel uncomfortable,” Rosalie explains. But she ignored her instinct to run away, and, with help from Marias’ caregivers, she’s getting more comfortable around him. So while Marias is learning to approach people in a more relaxed manner to help put them at ease, Rosalie is learning that just because a dog looks tough doesn’t mean he’s scary. 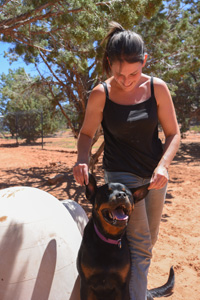 On especially warm days, the two sit quietly together in the shade — though Marias often forgets he’s not a lap dog and ends up with half of his big body draped over Rosalie’s lap. When it’s a bit cooler out, Rosalie will pick up Marias’ ball and toss it around the yard for him.

Though Marias has been perfectly comfortable around his new friend from the start, Rosalie’s had to look past some stereotypes about big, exuberant dogs in order to get to know him. She admits that it hasn’t always been easy. “He’s the biggest in-your-face dog I’ve ever been around,” she says, but she looks confident and sure when she pets Marias, tousles his soft, floppy ears, or tosses a ball to him. And it gets easier every time.

Now, Rosalie is hoping that her brave step will help other people take the chance to meet the happy, goofy dog she’s come to know and love. “He's a really good dog,” she says. It likely won’t be long before he finds his perfect human match — someone who loves nothing more than a giant ball of love, even if it sometimes comes on a bit strong.