Mayflower the cat came to Best Friends with FIV, dental disease and arthritis, but none of that scared away his adopter.
By Jenny Agnew

When Mayflower, the tubby tabby “who likes to make himself heard,” met first-time foster volunteer Madison Hardt at the Best Friends Lifesaving Center in New York, staff members were secretly crossing their fingers that Madison would adopt him — that he would be a “foster win.” An eight-year-old cat with several medical conditions, Mayflower needed just the right home.

The big, sweet cat stood out after arriving from the Atlantic County Animal Shelter in New Jersey. It was his personality and chattiness, plus his big belly (cultivated by extreme napping) and the fact that he was made for cuddling. His vet check, however, turned up some issues that he would need help with. 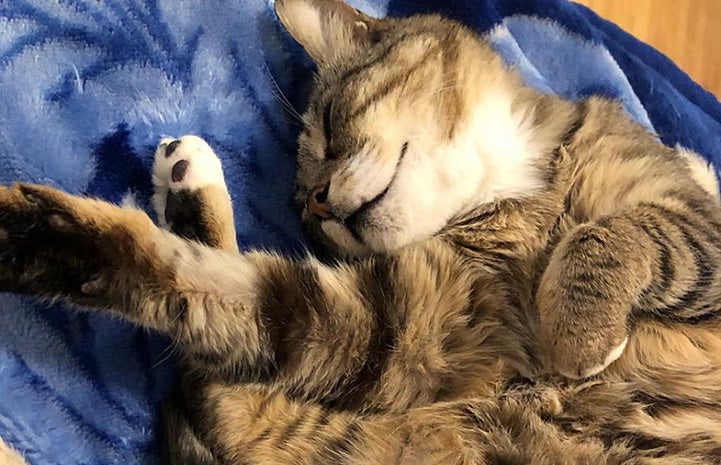 FIV and stomatitis in cats

He had arthritis and the feline immunodeficiency virus (FIV), as well as stomatitis or feline dental disease. Many cats with FIV become more vulnerable to stomatitis, but can live comfortably without any teeth. (Mayflower had several teeth extracted.) And though FIV weakens a cat’s immune system, with regular veterinary wellness exams and treatment of secondary infections like stomatitis, cats with FIV can lead long and happy lives.

For several months, Mayflower went back and forth among foster homes and the vet clinic for checkups, X-rays and dental extractions. His arthritis was easily treated, since there are many integrative options available, in conjunction with pain medication. A home for Mayflower

Emily DeFelice, supervisor of lifesaving outcomes at Best Friends in New York, says that despite being in and out of three different foster homes over the course of several months, Mayflower didn’t seem to regress when he returned to the center. On the contrary: “He ran the place,” she says with a laugh.

Although he did well there, a foster home would be a better environment for him. And with his health issues, Emily was looking for a special someone who could provide the care he needed. Enter Madison, who had been waiting to foster until she moved into a bigger apartment in Manhattan. Prior to filling out the foster application, she would go to the lifesaving center for fun to visit the animals, imagining what it would be like to welcome one into her home.

When she finally settled into her new place, she contacted Best Friends about fostering a cat and heard back within a day. “I was open to any cat but hoping to get an old, lazy cat who wanted to snuggle and be around people,” she says.

Mayflower was exactly the kind of cat she was looking for, so she took him home to foster. It wasn’t long before she decided that he was there to stay and adopted him. 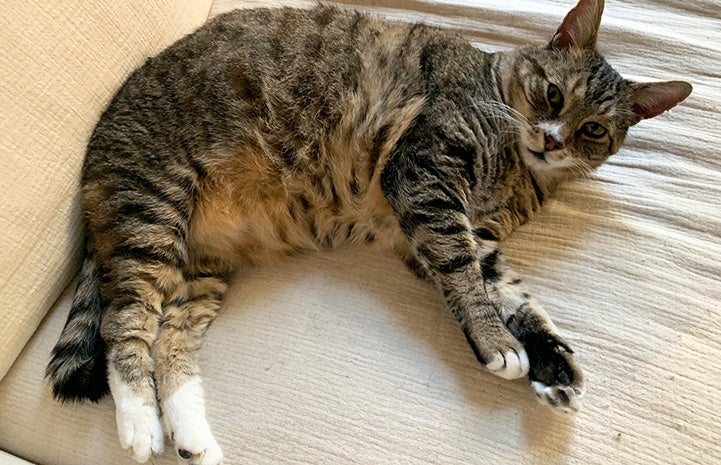 Adopting a cat with medical needs 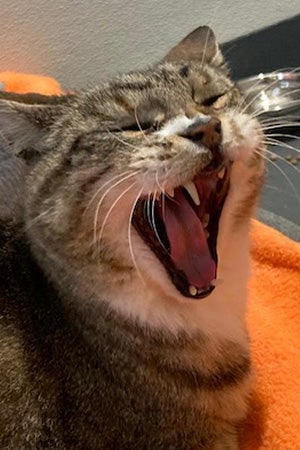 On adopting a cat with ongoing health issues, Madison says, “It sounds worse on paper than if you meet Mayflower,” adding that given how mobile and chatty he is, she wouldn’t have known he had any health challenges if someone hadn’t told her. And to anyone on the fence about opening their home to a pet with medical needs, she says, “You have to give the cat a chance.”

Unsure of the origins of Mayflower’s name, Madison kept it because she thinks it’s “quirky,” just like him. She describes him as “a little bit chunky,” and thinks that he’s hard of hearing, which makes him all the more endearing for his loud meows. “He has no concept of the noise he’s making,” she says. In the mornings, he sits by his food bowl, reminding her through an off-key but enthusiastic song that it’s breakfast time.

[From two legs to four: a kitten’s journey]

When Madison picked Mayflower up for fostering, among his take-home supplies was a water fountain — the object of his obsession. When he’s not sleeping, singing for his supper or dipping his toes in the fountain, you can find him cuddling, which is perhaps what Madison loves most about him.

Happy to sit next to someone on the couch, Mayflower seeks out people’s laps as prime real estate, and Madison is always willing to accommodate him. “He’s the perfect cat for me,” she says. Whether Mayflower was named after a ship or a transportation company, his interstate journey from shelter to shelter and across several foster homes finally led him where he was meant to be: home with Madison. 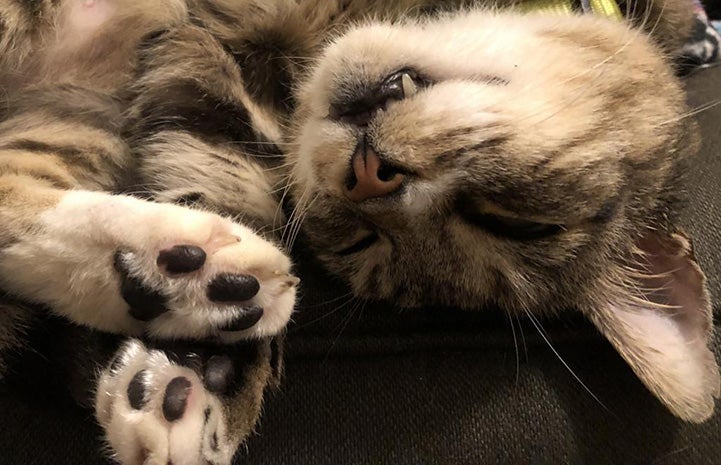 There are homeless pets of every size and stripe at shelters and rescue groups near you.

Adopt or foster a pet

Blind kitty brings a new rhythm to her adopter’s life