A bigger world for two tiny Chihuahuas with behavioral challenges

Image
Two Chihuahuas with behavior issues comes to Best Friends for help and training. They are now calmer and more confident.
By Christelle L. Del Prete

Anyone who loves little dogs can tell you that big personalities often come in small packages. Paco and Lil Brave, two feisty Chihuahuas, came from a shelter in Los Angeles to the Sanctuary because they had some behavioral challenges that needed extra attention. So, when they arrived this past October, they were promptly enrolled in what caregiver Tom Williams calls “remedial Chihuahua school” at the Clubhouse (one of the areas in Dogtown).

On the road to purple collars 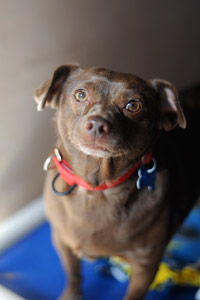 Although tiny and irresistibly cute, when they arrived at the Sanctuary, both dogs were assigned red collars. In the three-tiered collar color system at Best Friends, green means a dog is safe for anyone to handle, purple means a dog can interact and go on walks and outings with volunteers over 18, and a red collar means a dog can only be handled by staff members to ensure everyone stays safe and no dogs are put in situations too difficult for them. Dogtown caregivers and trainers work with red and purple collar dogs with the goal of getting them to the next level. If Paco and Lil Brave could graduate to purple collars, they’d have more social opportunities, like outings and trail walks with new people. And their new skills would help them find homes, too.

Both Chihuahuas needed some help on the road to purple collar status. Because they were suspicious of people, neither of them wanted to be handled. And Lil Brave displayed some guarding behaviors, which could make it difficult for him to find a home. He’d guard people he knew, his bed, and even his friend Paco – snarling if anyone got too close. He was just trying to protect the things he loved, but, in spite of his underlying fear, Lil Brave was showing a little too much bravado to make new human friends. 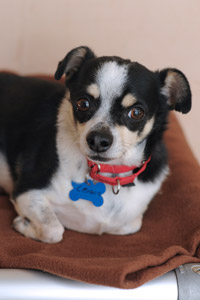 To help both dogs relax and not feel like it was them against the world, Tom and fellow caregiver Harlee Day spent one-on-one time with them. They began by sitting quietly on the floor and hand-feeding them – a common practice with unsocialized dogs in Dogtown. Once the dogs grew comfortable with hand-feeding, caregivers started gently touching their sides, then their ears and paws. Gradually, Paco became accustomed to Tom handling him, and Harlee can sometimes bend down to scoop up Lil Brave.

Though they are both still “little pistols,” Harlee says they’ve made a lot of progress in a short time. Paco has relaxed enough around people that he’s now wearing a purple collar. He can stretch his little legs on the Dogtown trails with some volunteers, and he’s been hanging out in the accounting office once a week, enjoying leisurely days as a Best Friends office dog. Lil Brave is also coming along. He’s still working on earning his purple, but he’s relaxed his guarding behaviors a bit, and is beginning to warm up. “They’re both really sweet little lap dogs once they get to know you,” Harlee says.

As young dogs, they also love to play and run “free.” One warm Saturday in late February, Paco and Lil Brave enjoyed a romp at the Best Friends dog park, soaking up the desert sun. Paco ran around with another dog, while Lil Brave watched the birds fluttering around. “Living in this environment has helped them calm down a bit and become more confident,” Tom says. And the calmer and more confident they become, the bigger the world will get for these two little dogs.