Bird with traumatic past finds safety

Sometimes it takes a while to find the perfect home. But when the stars align – when the fit is just right – it’s magic. That magic happened for Windy, an older Moluccan cockatoo. After years of neglect, he came to the Sanctuary, where he met a person who wanted a bird just like him – special needs and all.

Gradual recovery from a dark past 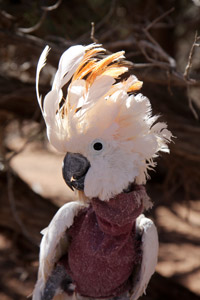 Parrot Garden is a bustling, active place, with cockatoos with pristine white feathers, parrots with vibrant red and blue plumage. There are bursts of singing, chattering, and dancing to music. But instead of joining the melee, Windy spent most of his time sitting quietly, hanging back from the action.

The missing feathers on Windy’s body and the wound on his neck – treated and healing but still visible – told the story of a traumatic past. Windy lived in a windowless shed for decades before coming to the Sanctuary. The stress and lack of socialization and mental stimulation caused the poor bird to start picking his feathers out and biting his own skin. Since he arrived at the Sanctuary, his care and comfort were everyone’s main concern – probably for the first time in his life.

Windy was given medicinal therapy to calm his nerves, and he found solace in the outdoor aviary, where he could enjoy the mild weather and socialize with other cockatoos. These birds helped him relax and gain confidence with people. Eventually, he began to muster the nerve to greet his caregivers as they approached. He was beginning to blossom, but with his feather-plucked body, would he ever find a home of his own? That’s where special people like Yvette Cressy come in. When she came to visit the Sanctuary, she happened to be looking for a bird just like Windy.

In the eye of the beholder

When Yvette saw Windy, she thought he was the most beautiful bird she’d ever seen, and immediately wanted to meet him. She had experience with birds and knew that, despite continued care and socialization, his problems could persist. But she had a trusted avian vet, and had other birds at home he could befriend. Instead of shying away from Windy’s special needs, Yvette had hoped to find a bird like him — one who really needed her and might have a harder time finding a home. 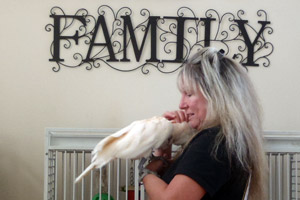 When Windy met Yvette, he was shy at first, but quickly decided he liked her. Stepping up onto her arm, he leaned his head into her neck and snuggled. That was it. Yvette fell in love and decided to bring him home.

Adopting Windy required big changes in the Cressey household. The family rearranged their entire first floor, swapping rooms, moving furniture, and placing Windy’s cage in a spot where he feels completely safe and relaxed. Yvette situated her loveseat right next to his cage, so Windy can climb out onto her arm for snuggle time. He can also climb up on his playpen or onto his jungle gym to play with soft toys, many of which she makes herself, that hang on it.

Since he arrived at his new home in December, Windy’s feathers have started to fill in a bit. Every day, when Yvette gets home from work, she goes right to Windy to give him a snuggle; he climbs up on the cage and starts bobbing his head, Stevie Wonder style. When she puts on music with a good beat, Windy bends his little knees, bouncing up and down. “I can tell he’s happy,” Yvette says. “I know I’m really happy.”

Meet the other birds at Best Friends.

Photos by Best Friends staff and courtesy of Yvette Cressy