Image
Blind cat with a host of other medical problems is rescued after being hit by a car. She gets help at the Sanctuary and has now found a home.
By Christelle L. Del Prete 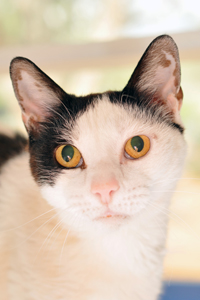 No one knows whether or not Gertrude the cat was blind before her accident, or if getting hit by a car was what caused her blindness. The good Samaritan who found her by the side of the road in a local community only knew that she needed help fast.

Gertrude was rushed to the Sanctuary, where she was treated by the Best Friends veterinary team for a nasty case of road rash. But that was only the beginning of the process of patching her up. As it turned out, the senior cat had a mouth full of bad teeth and needed to have several of them removed to make her more comfortable. And her ears were so irritated and itchy that she scratched them until they bled. Poor Gertrude was really uncomfortable for a while.

The cat who made an impression

Some medicine helped soothe her itchy ears and ease her aches and pains. And, though it took Gertrude a little while to recover from everything, she ended up making quite an impression during her five months at the Sanctuary. In fact, people found it impossible to go into the Cat World building where she lived and not notice her. There was just something about the little survivor that drew people in.

Despite her blindness and not feeling so well, Gertrude adapted to her surroundings and fit in immediately. Though she got around the room just fine, she staked out a favorite spot on a food bin under a countertop. She had her bed and food dishes there, and was content to curl up and sleep when there wasn’t much else going on.

Gertrude tolerated the other cats she lived with, but she’s far more interested in people than other felines. Because of her visual impairment, Gertrude relies on her other senses (especially her ears) to recognize familiar “faces.” She became an expert at picking up on people's voices, figuring out which of her caregivers were in the building and following them around the lobby.

When the visitor tours came by, it was Gertrude who rushed out to greet everyone. And nobody was able to resist her charms, least of all her new person, Heather, who was taken with the big personality in a little furry body. She applied to adopt Gertrude and bring her home.

So, after spending Christmas at the Sanctuary, the nine-year-old cat headed to her forever home just in time to ring in the new year. There, she got a new name to go with her whole new life — Toph (pronounced Toff, as in Toffee), a character on a popular children's show.

Thriving in her adoptive home 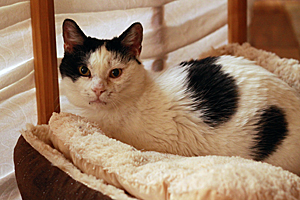 As she did at the Sanctuary, Gertrude/Toph adapted immediately to her new home. “Toph has adapted so well to her new family and home that most days I forget she's even blind,” says Heather. “We've already established some daily traditions, such as her crawling on to my lap every evening for cuddles until she falls asleep. We may be a new family, but I already love her with all of my heart and I'm so glad she trusted me to take her home.”

It may have been an accident that landed Toph at the Sanctuary, but once she got the help and care she needed to make her recovery, her happy ending was clearly meant to be.

To bring hope and healing to more animals like Gertrude, become a Best Friends member.

Photos by Heather and Mark Morgan