Blind horse gets help and companionship from once very fearful mare

Image
Once abused and abandoned, horse gets help and then pays it forward by helping and providing companionship for a socially awkward, blind horse.
By Christelle L. Del Prete

When Helen the horse lost her pasture mate, Amir, the caregivers at Horse Haven needed to find another suitable companion for the blind mare. She and Amir had had a good relationship, and his passing left Helen feeling quite alone. Because she can't see, Helen has a hard time living with most other horses. They often pick on her because she is not able to read the subtle visual cues of horse language - things as small as a warning look or a flick of the ear. Helen needed a pasture mate who could tolerate her awkwardness and occasional social blunders.

Abandoned horse who had been abused

So the Horse Haven staff had an idea: Why not try Helen with Cassia, who is also something of a misfit. Cassia came to the Sanctuary from a shelter in Las Vegas. Before that, she showed up homeless and alone in that urban jungle, with clear indications that she had been severely abused. Animal control picked her up and brought her to a local rescue group, who then contacted Best Friends. Cassia arrived at the Sanctuary with extreme fear issues. Horses are by nature flight animals, but Cassia's experiences had taught her that it was better to fight - to launch an offensive before she herself could be attacked. 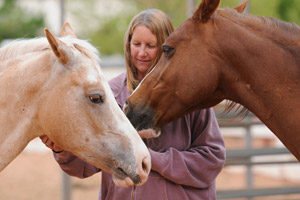 To help Cassia, the Horse Haven staff paired her with Smurf, a friendly and easygoing horse who helped her learn how to function around other horses and how to be a horse herself. Smurf isn't afraid of anyone; he loves people and likes to follow them around. He was able to show Cassia how well he engaged with them, but, in order for Cassia to get over her fear, she would have to interact with them herself.

That's when Sharlee Mayer decided to make Cassia her project horse. Sharlee's official job in Horse Haven is administrative assistant, but she's got plenty of horsemanship experience and a keen interest in working with horses who are overcoming physical and/or emotional trauma. The first thing Sharlee did was begin working to make Cassia less defensive and to gain her trust.

Teaching horse to trust through play

Trust is one of the four basic principles of Parelli Natural Horsemanship, the training method used at Best Friends. (The other principles are understanding, communication and relationship.) Together, horse and trainer put these principles to work in a series of seven games. The Friendly Game, for example, helps horses learn that human touch is nonthreatening, and Cassia definitely needed to be convinced of that. She's now come to realize that it's safe to let herself enjoy a good back or neck scratch every now and again.

Sharlee also demonstrated how she can get Cassia to move in the direction she wants her to go using hand signals, rather than physical contact, in the Driving Game. She says that after a year and a half of working with the diminutive mare, she's grown quite attached to Cassia and is really pleased by her progress. "She's come a long, long way since she arrived in August of 2011," Sharlee says. "She's a different horse now." It is exactly this kind of progress that makes working with horses like Cassia so rewarding. And Sharlee is still working with her to ensure that she gains trust and confidence around people, and thus becomes more adoptable. 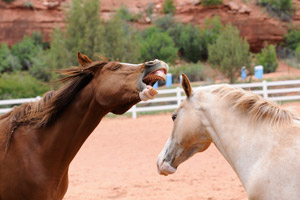 For her part, Cassia is paying it all forward. She's proven to be the perfect pasture mate for Helen. Not only is she very tolerant of, and patient with, Helen, but she also takes her new job of being Helen's companion very seriously. Now Helen is no longer alone, and Cassia is a whole new horse.

To learn more about Cassia, Helen, or any of our other adoptable horses at the Sanctuary, click here.