Bonding with parrots through music

When Best Friends intern Heather Kierstead from North Carolina was looking for a project parrot to work with, parrot staffers steered her away from Scooby Boo. He had a habit of chasing off all who came near — caregivers, visitors, everybody. Caregivers felt Scooby Boo (aka Boo Boo) simply wasn’t ready for that kind of interaction.

Of course, nobody knew Heather had a secret weapon, including Heather herself.

Heather was spending time reading to Maggie, a shy African gray, in order to help her get used to being around people. Maggie was so nervous at first that Heather would sit inside the aviary and turn sideways so as to appear as nonthreatening as possible.

Playing her ukulele for the birds 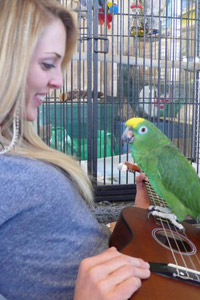 Then one day Heather had an idea that changed everything. "I thought it might be neat if I could bring in my ukulele," she says. She showed up with her instrument and started playing for Maggie. Right away, Maggie relaxed visibly. Heather’s idea was an obvious success.

Scooby Boo, however, reacted even more dramatically than Maggie. He immediately jumped to the bottom of his aviary and started running around to the tunes, practically dancing, even whistling. "It was amazing," Heather says.

The next morning when she arrived, Scooby Boo greeted her with a loud, "Hi!" Until then, nobody at Best Friends had ever heard him speak. From that point on, Heather brought her ukulele to play and sing for the birds. She was a universal hit.

Maggie became increasingly more confident. Across the yard, the cockatoos would actually stay silent and listen for a change (incredible!). And, Scooby Boo continued to let down his defenses. Through Heather’s music and influence, Scooby Boo began to finally trust people.

A new beginning for a bird 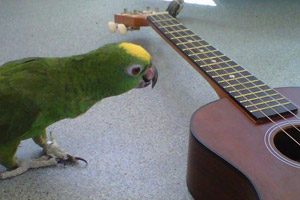 This internship actually took place a little over a year ago, yet it set several exciting things in motion. Since the internship, Scooby Boo has moved successfully into a foster home. He can now truly connect with people. Maggie, with her increased confidence thanks in no small part to Heather, has already been adopted. Clearly, sharing her time and gifts of music have left a significant impact.

"I loved everything about the internship," she says. This was a new beginning for Heather, too. Though that was her first time working with parrots, it certainly won’t be the last. She now has plans in discussion to work with another parrot rescue back home, sharing music with the birds as before.

Heather returned recently to Best Friends for a short visit on her way to another animal internship in California. During her stay, she again pulled out her secret weapon of a ukulele to play and sing for the parrots at the Sanctuary.

They listened with rapt attention, enchanted by every note.

If you’re considering a career working with animals, a Best Friends internship might be the perfect starting place.

Photos by Best Friends staff and courtesy of Heather Kierstead