Image
Border collie exhibits reactivity due mostly to fear, but training and the help of another self-assured dog help build her confidence.
By Christelle L. Del Prete

Karina is an incredibly bright dog. Not only is she a border collie mix (a breed known for intelligence and herding skills), but the eight-year-old dog has also learned quite a few tricks over the years. How many dogs, for instance, know how to flip light switches on and off?

But in spite of Karina’s intelligence and training, she has some hard-to-break habits. When she is being walked on a leash, she overreacts to certain triggers — anything from dogs barking out of car windows to motorcycles, bicycles and trailers.

Most of Karina’s reactivity is fear-based. She’ll lash out at things before they can hurt her. That behavior not only decreases the likelihood that people will want to take her for walks, it’s no fun for Karina either. No one likes to be so afraid that they feel compelled to defend themselves. It’s also unsafe to have her lunging at passing cars. To stay safe, Karina would have to learn how to relax on a leash — and that means lots and lots of practice.

Taking a border collie on outings 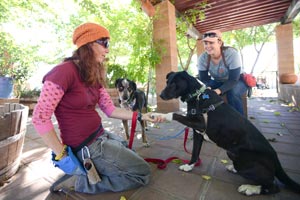 Because the Sanctuary is pretty quiet, Caley Boone, one of Karina’s caregivers, takes her to town once a week. There, Karina encounters lots of cars, motorcycles, bicycles and trailers. Often, there are other dogs, both on the street and in passing vehicles. And the more exposure Karina has to all of these things, the more comfortable she becomes with them.

On a recent morning, Caley and Karina waited in the parking lot of a local grocery store for Karina’s roommate, Sinatra, and his caregiver to join them. “It’s actually good for her to hang out here with all of these stimuli,” Caley explained, pointing to the busy road that runs through town, while Karina sat quietly at her feet.

Walking calmly on a leash

Once Sinatra arrived, it was time to hit the sidewalk that runs along the main road. While they walked, the dogs were not only learning from their caregivers, they were learning from each other. Sinatra is calm on the leash, while Karina has the confidence that shy Sinatra lacks. Together, the dogs are helping each other feel better about things that scare both of them.

The two strolled calmly along the sidewalk until they came to a grassy spot that Karina couldn’t resist. Even with all the cars whizzing by, she was relaxed enough to wiggle on her back in the grass, with all four feet in the air. But there were challenges ahead. A woman walked by with a barking cocker spaniel, and Karina immediately went on high alert. Caley gave the verbal cue “Look at me,” and Karina quickly refocused on her caregiver and was rewarded with a treat. 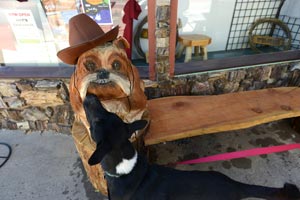 Caley explained that the goal is to get Karina to change her pattern, to look back at Caley (or whoever is walking her) when she sees something bothersome. And Karina is getting it. When a motorcycle roared by, she did a tiny little hop toward it, then self-corrected, turning her whole body around to face her caregiver. And when a dog barked at her from inside a truck, Karina was startled, but then did exactly what she was supposed to do.

After a little more walking, Karina and Sinatra were tired. It wasn’t the physical exercise so much as the mental stimulation that wore them out. But there was one more stop to make before they headed back to Dogtown — the drive-thru. Both dogs got special treats for all their good work. After a successful and satisfying outing, Karina and her friend returned to the Sanctuary, each one step closer to walking with confidence, no matter what’s happening around them.