Image
A bored dog is entertained and stimulated with a simple box game. Enrichment play can help a dog get exercise and have an enjoyable time.
By Christelle L. Del Prete

Aries the dog sniffs at the boxes arranged in a loose cluster in front of him. Then he walks a short distance away, sits down, and stares intently at them for a minute. His caregivers can almost see the wheels turning in his head, and that’s a very good thing.

It used to be that Aries, originally a stray who ended up in a shelter, had just one outlet for boredom or frustration — jumping up on people and using his teeth to tell them he was feeling anxious or excited. But all that changed when he came to Best Friends Animal Sanctuary, where Dogtown trainers and caregivers quickly realized how incredibly smart Aries is, and began helping him channel his unique intelligence in a way that has made him much happier. 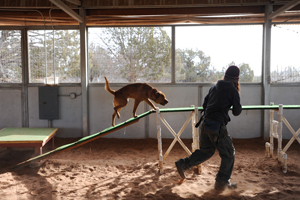 Aries no longer has time to get bored or frustrated. At the Sanctuary he has the schedule of a child prodigy or a teenage overachiever, because keeping him busy is what keeps him happy. He works through the obstacles at the Sanctuary’s indoor agility course, gets to frolic in the dog park, and do nose work — a sport in which he uses his nose to seek out scents. But of all the activities he does, Aries is at the top of his class with the box game.

The setup is low-tech, and it may look like an overly simple “problem” for Aries to solve — plain cardboard mailing boxes on the ground. But the genius of the game lies in the fact that Aries has to decide what to do with the boxes, versus being told what to do by the trainer. And the more sophisticated his choices are, the greater his rewards will be.

In the beginning, the trainer rewarded Aries with a treat just for looking at one of the boxes. Then he got a treat for touching a box with his foot or his nose. As he figured out that he’ll get a treat for thinking up new ways to play the game, Aries came up with all sorts of tricks — all on his own.

Within a few sessions, Aries made up the moves of touching, sliding and standing in a box. Now when he plays the game, he’ll hop into a large box and spin around in it. He’ll place his foot on the edge of a smaller one, or scoop his nose under it and flip it up into the air. 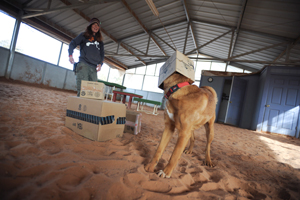 The activity is just one of the many games dogs get to play in Dogtown to keep their bodies and minds in good shape. That’s especially important for a dog like Aries, who has an especially sharp mind and problem-solving skills.

Although the game is called “101 things to do with a box,” for Aries, the possibilities really are endless. And he delights in hamming things up. One day, he kept flipping a box until it landed, upside down, on his head. He turned his head (box and all) toward his caregiver, waiting for her approval and his treat, wagging his tail all the while.

Because he takes time to ponder his moves, and comes up with such impressive (and silly) ones, Aries has earned himself a reputation as one of the best thinkers and problem solvers at the Sanctuary. And, as long as he keeps learning and playing, there will always be something new for him to try in Dogtown and, eventually, in his very own home.