Image
Volunteering at Best Friends with their granddaughter has led older couple to help coordinate Austin's Strut Your Mutt.
By Jennifer Hayes

Though they financially supported Best Friends for years, Bic and Mary Wood did not become true advocates until they introduced the organization to their granddaughter. One glimpse of the Best Friends website and eight-year-old Emily was hooked. Mary explains, "She just grabbed the ball and ran with it."

And when Emily asked for a trip to Best Friends Animal Sanctuary for her ninth birthday, Bic and Mary had no idea how it would influence their lives. 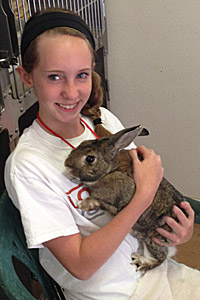 They recently celebrated Emily's 12th birthday and fourth visit volunteering at Best Friends. Don't tell the other animals, but the dogs and bunnies are their favorites.

This is the third year in a row that Emily has held Snickers the rabbit, which is a well-deserved payoff for their long and productive workday. "When Emily gets to Best Friends, her age increases by about a factor of two," says Bic. "She's 12, and she acts 24. Chores that would be a major battle to get her to do at home, she's just in there. It sucks you in somehow."

However, Emily isn't the only one learning. Rabbits eliminate roughly 360 pellets per day. Basically there's no end to their poop production. So last year one of the Bunny House caregivers shared the secret to cleaning the rabbit pens - don't look back - to which Bic says, "That's not a bunny lesson. That's a life lesson."

Boxer and mastiff mix is a bed hog dog

Their fun continues into the evenings with sleepover dogs, and this year they hosted Chester. Bic describes him as a "boxer/mastiff mix, and if that sounds large, that's right."

Their evening together was wonderful, but once it was time for bed, Chester had a tough time deciding with whom to sleep. Emily proved to be the winner, which she enjoyed … at first. It turns out Chester is a bed hog, and he's so big, he's hard to move. So Bic came to the rescue and switched beds with his granddaughter, becoming Chester's sleeping companion. However, Bic laughs and says, "I didn't have any better luck moving him than she did." Never fear, Chester eventually decided to sleep parallel to Bic, who managed to finally catch some shut-eye. 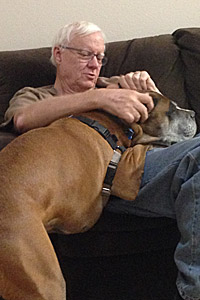 Bic and Mary use their trips to Best Friends to recharge for all the work they do on behalf of animals back home in Georgetown, Texas. A few years back, they helped a local shelter when they took in 75 dogs from a nearby puppy mill. There was one little Chihuahua who was a little shyer than the others, so when her five puppies were adopted, Betty Boop remained overlooked. But she connected with Mary who quickly succumbed to Betty's charms and adopted her, seamlessly joining their family of three dachshunds.

Now they both volunteer for Williamson County Regional Animal Shelter, a No More Homeless Pets Network partner, helping with adoption events and transport.

Though the Sanctuary is over 1,000 miles away, Bic and Mary help represent Best Friends in the Austin area. For the second year in a row, they will be distributing information and literature at Puppy Mill Awareness Day, and have spent months in preparation for Austin's Strut Your Mutt, as co-volunteer coordinators.

They had not anticipated volunteering for such a key role, but saw the need for leadership and stepped up to help. Luckily, Austin is such an animal-loving town, they've been able to surround themselves with a tremendous volunteer team and anticipate a fabulous event.

"The real reason it's a good thing is the money goes to local shelters," says Bic. "It's free money, and all the shelters need to do is have people sign up to come out and have a good time."

Learn more about volunteering at one of our Strut Your Mutt events nationwide.