Bringing families together at the Sanctuary

Image
Volunteering for the animals at Best Friends strengthens the bond between a woman and her grandson.
By Jennifer Hayes 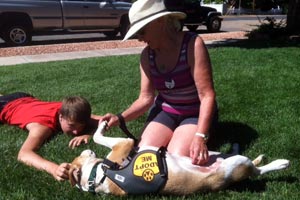 When it comes to summer vacation, most 15-year-old boys enjoy playing video games, hanging with friends and maybe even dating girls. You certainly wouldn’t think that spending nine days at an animal sanctuary with your grandmother would be high on their to-do list. Luckily, Owen and his grandmother, Nancy Moore, broke through this stereotype recently when they visited Best Friends together.

Five years ago, Nancy started volunteering with Delaware-based Faithful Friends, a No More Homeless Pets Network partner. She continued advocating for the animals in 2011 when she visited Best Friends for an entire month. She was hooked and, since then, returns twice a year.

Of course, when you love a place, you want to share it with others. So she had a brainstorm. Her grandchildren were growing up fast. Why not let them come to the Sanctuary with her, before they learned to drive and became too busy?

“It is important to create fond memories,” says Nancy of the significance of bringing her grandchildren to Best Friends, “and, for me, having the added bonus of sharing something I love with them.”

She decided that each grandchild at age 15 would experience a “rite of passage” by visiting Best Friends and volunteering with her for roughly a week. Owen, who just turned 15, was the first grandchild to make the trip.

Though the time with her grandson was important to Nancy, she didn’t have high expectations that an adolescent boy would have a good time on a long trip with his grandma. And Owen, who had listened to his grandmother talk about Best Friends for years, wasn’t expecting much either.

“Before I got there, I (figured) I’d be bored after a couple days,” he recalls. “But the truth is, when you finally get out there, there’s just so much to do among all the different places like the pigs, cats and dogs. And even within those areas, there are just so many things to do.”

Surprise! They both had a fantastic time. Their common love for animals gave them an instant connection, and they discovered that Best Friends not only brings pets together with people, but also brings people closer together.

Advocacy in the next generation 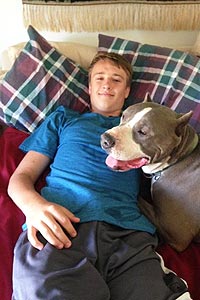 The pair visited many different animal care areas: cats, pigs, horses, parrots and wildlife. However, they both enjoyed their time with the Dogtown residents the best.

They not only got one-on-one time with each other, but also enjoyed quality time during outings and sleepovers with several lucky dogs. Nizhoni gave them some snuggles in between naps while they helped at the Best Friends booth at the local farmers’ market. Azure is generally a bit cautious around new people, but she took to Owen right away. In fact, she even cuddled up next to him on outings. However, overnights with Bruno provided the most amusement. Enjoying his breaks from Sanctuary life, Bruno made himself right at home on the couch. And when it came time to sleep, Owen and Bruno split the bed, though Bruno always maintained some physical contact with his newest friend.

Now back home in Austin, Texas, Owen wants to help a local rescue group. Plus, he wants to tag along during his grandmother’s trip with his cousin next year. His newfound animal advocacy is music to Nancy’s ears.

“Anyone who does rescue work wants to (Save Them All),” says Nancy. “But starting the next generation with that belief and letting kids see the value in every creature may create a generation that will wear the T-shirt (saying) ‘We Saved Them All.’”