Editor’s note: In the years since Bruce was adopted by Anne Rowley from the Best Friends Lifesaving Center in Salt Lake City, he’s been with her family during both good and difficult times. Recently, Anne penned a beautiful update about Bruce, and since many of us can recall a time when pets helped us heal, Anne gave us permission to share her story. It’s one that speaks to the power of pets’ unconditional love, their innate ability to give us hope and their ability to comfort us in a way nothing or no one else really can.

On November 2, 2013, my husband and I walked into Best Friends Lifesaving Center in Salt Lake City looking for a cat to add to our family. We were hoping to find one that was a little more of a cuddler than our first cat. We sat down and immediately a black cat with one tuft of white hair on his chest plopped in my lap and began licking my hands. We knew we had found what we were looking for, but we didn’t yet know how much he would mean to us.

We named our new black cat Bruce because in the first photo we took of him the shadow of his head looked unmistakably like our favorite superhero (Bruce Wayne, aka Batman). Bruce is unlike any cat I’ve ever known. He doesn’t always land on his feet, is aggressively affectionate and loves to be loved. His meow is soft and short, never obnoxious. He doesn’t mind riding in the car. Because of this, I would often take him with me to visit my parents and brother. They fell in love.

After my daughter was born, I was overwhelmed living in such a small space with an infant and two cats. My dad offered to take in Bruce until things settled down. I would often get phone messages where my dad would tell me how happy Bruce was, that he’d just had a little bit of leftover salmon or ham. Many of these voicemails I never deleted, and eventually I was so happy I didn’t. 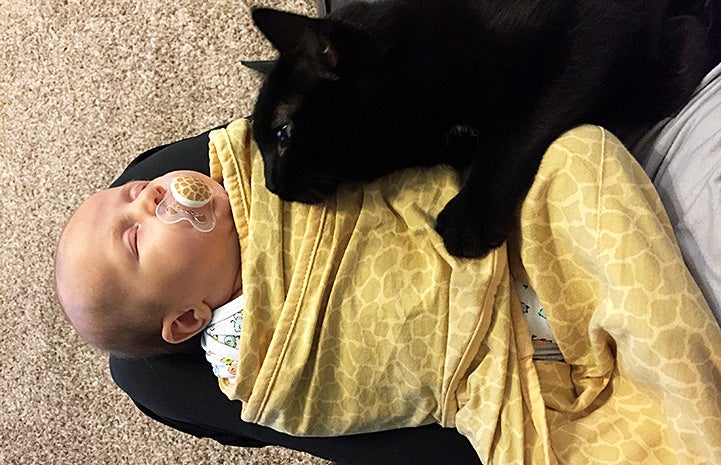 In January of 2016, my dad was diagnosed with cancer, a rare and aggressive form of lymphoma that took his life just two months later. He came home on hospice for about two weeks and during those two weeks Bruce never left his side. There are only a few pictures we have of my dad during that time, but more often than not, Bruce can be seen curled up on his arm. It felt obvious to all of us that Bruce knew what was taking place, and he would not abandon my dad while providing comfort and a soft touch in those last weeks. 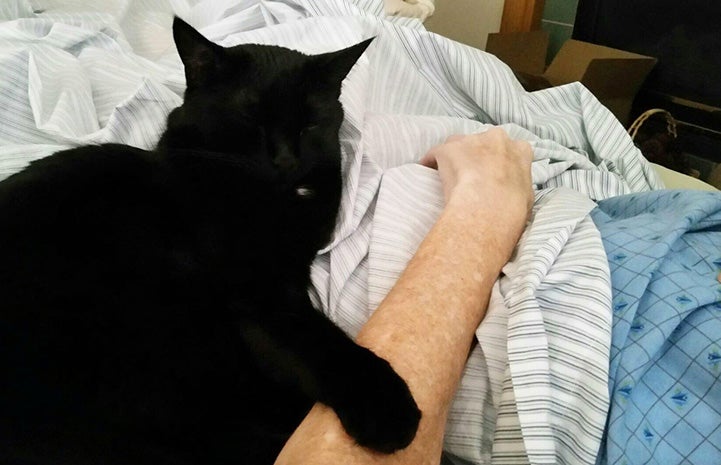 Eventually, my mother would move from that home and Daniel, my younger brother, struck out on his own. Daniel was the wittiest person you’ve ever known and had a tender heart, especially when it came to cats. When he moved to his own place, he took Bruce with him. We knew that Daniel needed Bruce most, as he suffered from untreated bipolar disorder and was prone to periods of dark depression and loneliness. There were many times that Bruce’s companionship got him through the heavy fog of depression.

Eventually, Daniel’s depression became too much for him to bear and he decided to end his life in December of last year. We were devastated to lose him. In the short note he left behind, he dedicated a paragraph to Bruce and how he had gotten him through some of his toughest times. Daniel expressed his wish that his love could live on through Bruce. He couldn’t have chosen a better vessel. Bruce’s unconditional love is a balm that I wish everyone could experience. 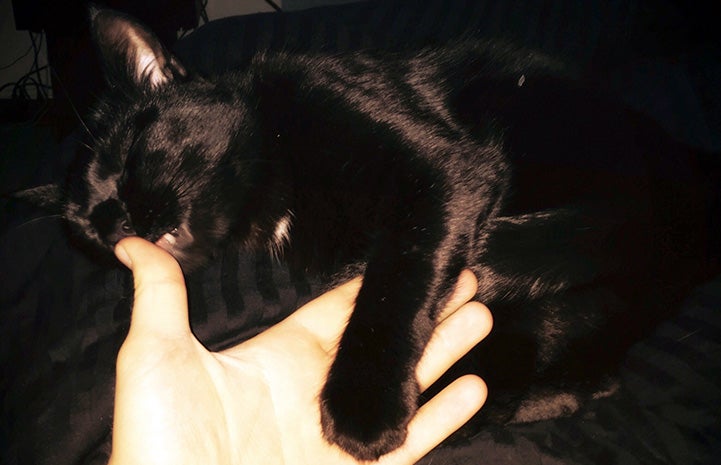 Bruce moved to his next home of healing, that of my mother who had already lost so much. I’ve seen the way that Bruce has given her purpose and joy in the wake of unimaginable tragedy. I’ve seen the way that Bruce’s purr, when curled up on any given person’s chest, seems to defibrillate broken hearts. There is something unmistakably miraculous about our little black cat. He is the luckiest thing to have crossed our path.

Find love. Adopt a cat near you