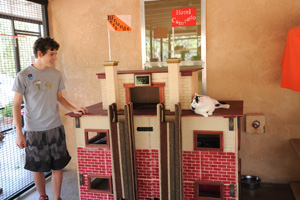 Nearly a year ago, Perrin began planning to make a special donation to Best Friends. Although the teenager, now 14 years old, knew he wanted to give something, he wasn’t thinking about money or about volunteering in the traditional sense. He wanted to contribute something unique — something he could dream up in his heart, plan out in his head and create with his hands.

As Perrin pondered what he could do, his idea began to take shape. First, he wanted to give something to the cats at Best Friends, since cats have always been his favorite animals and constant companions. He’d also become interested in working with wood and power tools since he helped his mother, Kirsten, install new flooring in her dance studio. Then, Perrin was assigned a project at school, and the task was to design and build something.

That’s when Perrin knew exactly what he would do — build a hotel for cats based on the design of the Hotel Colorado in Glenwood Springs, Colorado. His final creation, playfully named the Hotel Catorado, represents not only a whole school year’s worth of work, but also hours of brainstorming, a good understanding of cats (Perrin and his family have three), careful planning and clever innovation.

On a recent Saturday, Perrin, his parents and his younger brother made their very first trip to the Sanctuary. When they arrived in Cat World, Perrin presented his creation in Benton’s, a building that houses many of the Sanctuary’s special-needs cats. The cats watched curiously as Perrin and his father put the finishing touches on the hotel.

Though there’s plenty of flair and fun, everything about the hotel is extremely functional. The pillars on each side of the entrance are scratching posts. Inside there are comfy beds, toys and scratching boards. A few of the rooms are connected with cat tunnels that are easy to navigate, so cats never feel trapped or lost. Though Cat World is well furnished with cat trees and towers, Perrin’s cat hotel is truly the first of its kind.

Cat World team leads Jenn Corsun and Katie Kyzivat are both extremely impressed with Perrin’s gift to the cats. “Not only does the hotel open up in the middle, but the roof lifts off for easy cleaning,” Jenn says, “and the entire inside is lined with removable, replaceable carpet remnants, attached by Velcro. It was very thoughtfully constructed for cats.” Katie adds, “We’re so grateful to have been given this.” 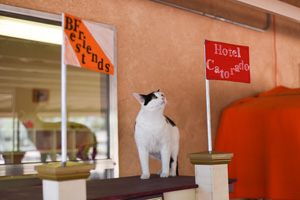 Though the humans were clearly impressed with Hotel Catorado, it was soon time for the cats to test it. Best buddies Squeaker and Breaker ventured over to investigate together, but Dilly, a petite brown tabby with a paralyzed hind end, took the lead and was the first one to go inside. Moments later, a black cat named Alexander hopped up on the roof.

Finally, Perrin got to watch his hard work pay off as, one by one, the cats were drawn to his hotel like magnets. “Creating this has been really fun and satisfying,” he says. “I’m really happy to be able to donate this to Best Friends. It's a great feeling to give to the community.”

“We're really proud of him,” says Perrin’s mom. “Except for brainstorming sessions around the dinner table, the family didn't help with the design at all. It's his brainchild and his baby.”

Perrin doesn’t plan to stop there. He’s got the building bug. Already, he’s trying to decide what he’ll build next, and which Sanctuary animals he’ll build it for.

There are lots of ways you can help animals at Best Friends.