Image
Pets love a job to do, this special cat adds super sleuth to his title.
By Best Friends Animal Society
By David Dickson

If James Bond had ever decided to adopt a cat, Love Bug would have been the ideal fit. It’s too late for Agent 007, however, because Love Bug already has a home, and he isn’t going anywhere! Besides, if Love Bug’s track record thus far proves anything, James Bond would likely end up feeling outclassed before long.

Proving right off the bat that he’s not your average housecat, Love Bug didn’t pick just any way to end up at the Sanctuary. No, he stowed away in a car engine! A woman from Southern Utah took a trip to visit family up north. When she returned, there was Love Bug stashed away in full superspy fashion under the hood. The woman who found him in her car tried to take care of him, but the family dog would have none of it. Space was available at the time, so Love Bug came to Best Friends. 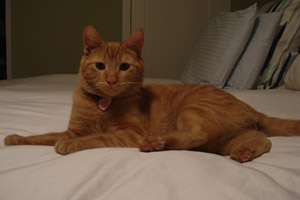 He didn’t stay for long.

This cat earns his name. Love Bug cuddles up to everybody he meets! And since he’s only around a year old, he still has plenty of kitten energy to rush from person to person to say hello. A cat like that usually ends up finding a home sooner than later.

Samantha Humphrey and her husband, David Brownfield, were looking to adopt a cat. One of their two cats had recently passed away after living with them for 11 years. The remaining cat in the home, The Bird, needed a companion. When they touched bases with the adoption folks at Best Friends, Love Bug sounded like exactly what they were looking for. They decided to adopt. "He fit right into the household," explains Samantha. He’s made the perfect companion for them, as well as The Bird. "They play all the time," she adds.

Yet it hasn’t only been his playful nature that’s made Love Bug feel so right at home. You’ll soon see there couldn’t have been a better fit for this cat who is half sweetheart, half secret agent.

As it turns out, Samantha is a writer and producer for television shows, most often crime shows. She’s written for "CSI: New York," the new show "Body of Proof" and more. In all her writing efforts, however, she’s never concocted a storyline such as what happened in her own home not long after Love Bug moved in.

Samantha woke one morning to find Love Bug meowing loudly on her bed. He normally sleeps in a basket in the front room. That morning, though, Love Bug was clearly out of sorts. She thought maybe he wanted a bite to eat, so she brought him downstairs for some breakfast. Her husband was gone for an early-morning workout.

Turns out breakfast had nothing to do with it. Love Bug barely glanced at the bowl of food, beelined it for the curtains by the front window, zipped under the curtains and flew out the open window. Samantha was shocked. The window definitely hadn’t been open the night before.

She ran outside to grab Love Bug and called her husband right away. Together, they quickly pieced together the bad news: they had been robbed. The burglar managed to steal some cash, as well as David’s wallet. Other valuables out in the open, however, had been left alone, which leads them to believe Love Bug must have interrupted the burglar’s activities. He has since earned himself the nickname Guard Bug!

Yet this sleuth of a cat wasn’t done yet. When police came over to look for clues as to how the burglar got in, they weren’t turning up anything. The opened window didn’t have fingerprints, and all the other doors and windows appeared to be secure. 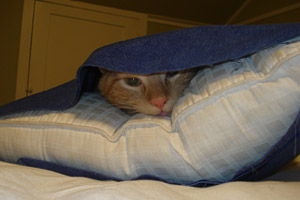 Love Bug wasn’t having any of it. He knew something, and did everything possible to let others know. Under normal circumstances, Love Bug plays the role of social butterfly with everybody in the room. Not that day. He was all business. Pacing back and forth, Love Bug kept fussing and drawing attention to a certain window that appeared closed.

They noticed his behavior ("Finally!" Love Bug must’ve said) and checked out the closed window. Upon further inspection, they realized that the window was slightly loose after all. They brought in forensics again. This particular window actually had fingerprints on the outside. That’s right, Guard Bug not only chased the burglar out the front window, he also pointed out the other window the burglar had used to gain access to the house!

Samantha jokes that this might give her some story material for future shows. In all her forensics plotting in the past, she’s never had a cat solve a case before.

So … in other words, sorry James Bond, but Love Bug isn’t going anywhere! It’s not easy to find a cat who’s a love sponge, playful companion, writing muse and superspy all rolled into one! "We enjoy him very much," says Samantha.

Adopt! Find your own Love Bug at Best Friends! There are great pets, ready to go home with you living at the Sanctuary. Click here for our Adorable Adoptables!

Donate! Your support allows us to help even more animals. Click here to find out the many ways you can give to Best Friends.