Can a cat and dog be friends? Of course, they can.

Image
Can a dog and cat be friends? Of course, they can. Meet an adopted puppy and young cat who are best friends who love one another.
By Nicole Hamilton

It’s not every day you get to talk about someone rising from the ashes — and mean it, literally. But that’s what happened to a cat named Tank who was found covered in ash with his whiskers singed, near a home that had burned down.

When some people in the neighborhood found Tank and brushed away the soot from his fur, they noticed he had sustained burns that needed immediate medical attention.

They brought Tank to a Los Angeles Animal Services shelter where the medical team treated his injuries and placed the six-month-old cat in a special area of the shelter where he could heal. Since no one came looking for Tank, caregivers worked on getting him healthy enough, so he could eventually go on to a new home and a fresh start. The plan was to transfer him to the Best Friends Pet Adoption and Spay/Neuter Center, so each time the staff picked up pets at the shelter, they’d check on Tank.

Cat gets a puppy playmate

Once Tank arrived at the Best Friends center, he received more care until he made a full recovery and it was time to go on to that new home.

It wasn’t too long before a woman named Beatrice came to the center looking for a friend for her young dog, Gunner. She was looking for a puppy playmate (not a cat), but there weren’t any puppies at the center at the time. So, on a whim. she walked through one of the cat areas, and that’s how she met Tank. 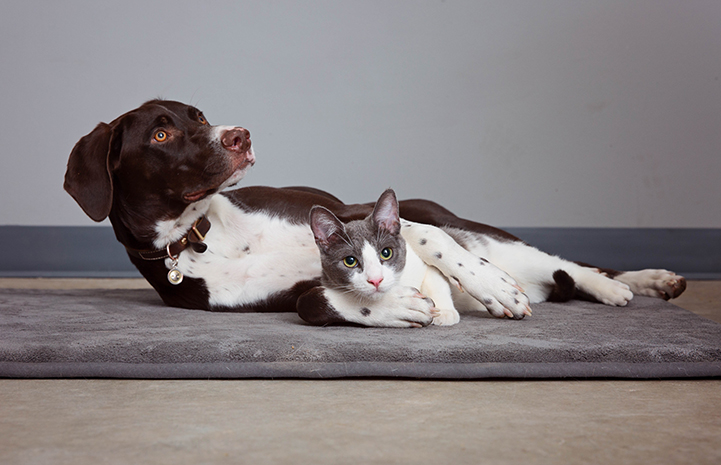 Let’s hurry up and be friends

Beatrice will tell you she really didn’t have a say in the matter. “He picked me,” she says.

“Tank sort of slid out of the bed where he was laying when he saw me and was so friendly,” says Beatrice, who had never had a cat of her own before. “I decided to give it a try.” 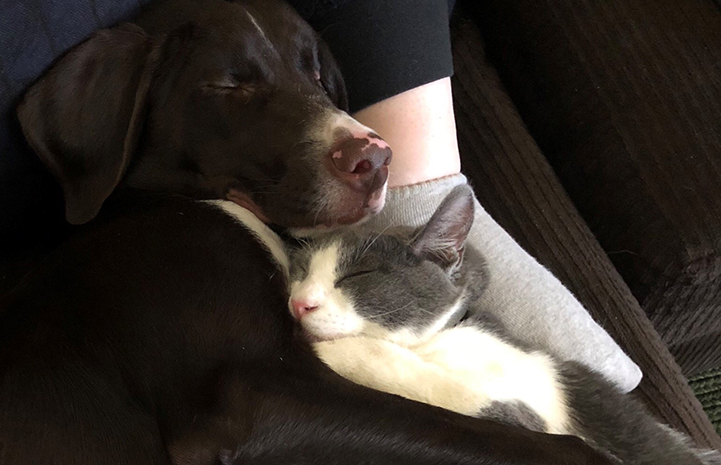 Since she was a novice cat adopter, Beatrice planned for some challenging moments while Gunner and Tank got used to one another. But even though her plan was well thought out, it proved to be unnecessary. About five minutes after Beatrice introduced Gunner and Tank through a doggie gate, Tank hopped over it because he couldn’t wait to be Gunner’s friend.

How to get cats and dogs to like each other

Today Tank and Gunner play together, eat together, cuddle together and sleep together. Basically, they’re BFFs. Gunner has someone else at home who has just as much boundless energy as he does, and Beatrice no longer worries about him being lonely when she leaves the house. 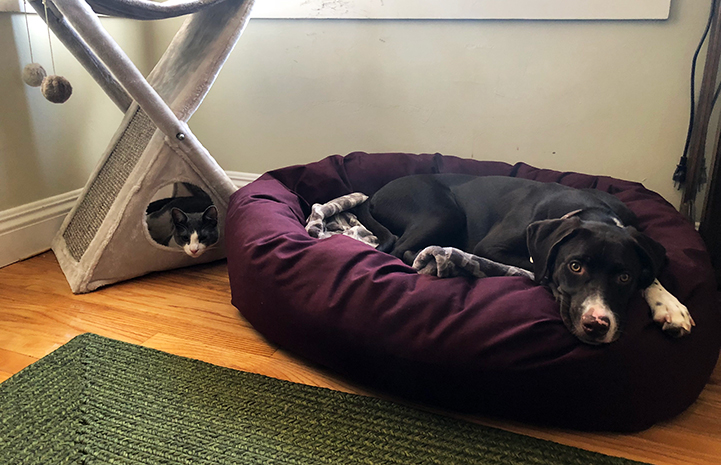 “So much has changed since Tank has been here,” says Beatrice. “My mom passed away in August and she was my last close family member. I knew I needed someone in my life to take care of, so I adopted Gunner. But I knew he (also) needed a friend. Tank has been such a relief.”

As for Tank, he’s about as far away from living in a burned down building as he can get.  He healed nicely thanks to the care he received. He’s put all that behind him and is living the good life, thanks to an adopter who decided to try something new — and his best friend who doesn’t mind at all that he’s not a puppy. 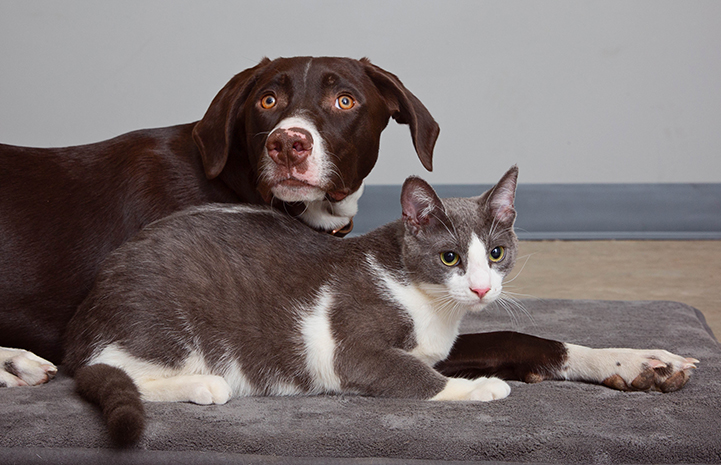 Photos by Lori Fusaro and courtesy of Beatrice Victor