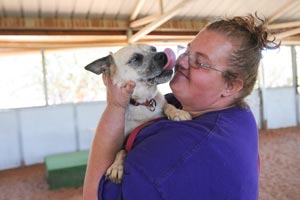 Raquel can’t help it if she’s got a lot of energy and is a bit tense in certain situations. The pretty, two-year-old red heeler mix was abandoned and, understandably, traumatized by that experience. She became so frightened and wary of people that a rescue organization had to humanely trap her to get her off the streets.

Raquel ended up at a shelter where, most people would think, a young dog like her should have had a good chance of getting adopted. But, because she was shy in new situations and had picked up a few bad habits (like rushing up to doors and gates and barking at people through them), it was hard for her to meet someone new who might want to give her a permanent home. And, true to her heeler nature, she craves an active lifestyle and needs a job to do.

Mired in a stressful situation and viewed as a challenge for potential adopters, she moved to the Sanctuary, where her caregivers are working to help her gain confidence while, at the same time, keeping her active and entertained. In just a few short months, she’s learned a whole new repertoire of useful cues and impressive tricks.

For example, before caregivers enter her run, they tell Raquel to go outside. That way, instead of barking and rushing the door, she practices an alternative (and more positive) behavior by running into the large yard to wait for them. When they meet her outside, Raquel races over and leaps into their outstretched arms as if greeting a long-lost friend. 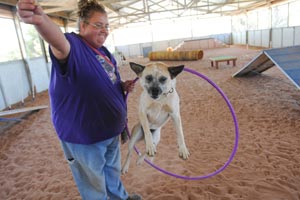 Raquel also can crawl on her belly when asked, or crawl into her caregivers’ laps for a quick cuddle. She can jump up on things – like platforms or even someone’s back – before jumping down on cue. And she can leap through hoops, almost floating on air as if she has springs in her back legs.

But nothing is more entertaining than watching Raquel show off her natural flair for dancing. All caregivers have to do is stand in front of her and move their arms in a circular motion. Raquel seems to follow the motion with her nose, then twists and turns  gracefully as she sails through the air.

The former stray with a trust issue is now at the top of her game, ready for a home of her own and hoping it’s one where she can keep on dancing.

See Raquel’s tricks here, in a video made by her caregivers.