Image
Katrina canine survivor relaxes into a happy life in the years since the hurricane.
By Christelle L. Del Prete

In addition to Best Friends’ extensive work in New Orleans and in a rescue camp in Tylertown, Mississippi, the Sanctuary took in about 145 canine Katrina survivors in the days, months and years following the unprecedented disaster.

During September we’re sharing updates on some of the Katrina pets who still call Best Friends home, to let people know how they’re doing a decade after their lives were turned upside down. 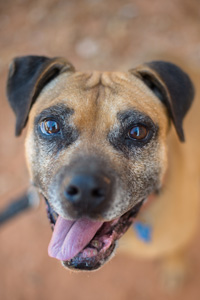 Ask Dogtown caregivers what makes Puma so amazing, and they’ll tell you it’s the way her infinite energy and fun spirit make everyone smile.

That’s quite a change from the timid survivor who gave off a serious vibe when she first came to the Sanctuary. But who could blame her? The doe-eyed pit bull terrier mix was three years old when Hurricane Katrina hit, and it left her with some deep emotional scars. But over the years, with lots of TLC from caregivers and hard work, she’s been able to overcome her challenges and show her carefree and loving nature.

Puma used to be so shy and insecure around new people that she had to be introduced to strangers very slowly. She also had a tendency to guard her food — a common behavior in dogs forced to scavenge in the wake of the hurricane. She didn’t much like other dogs, either, and for years she didn’t want anything to do with them.

But Puma, now 13, has become calmer and happier with age. Since she came to the Sanctuary, she’s made changes that make her life both easier and more fun. First, she learned how to sit and wait for her dinner. She gets lots of rewards for her patience, including the chance to eat her fill, and dinnertime has become a lot less stressful for her.

Because she also used to guard her favorite toys — tennis balls — her caregivers taught her how to exchange one ball for another, until she relaxed and got comfortable enough to drop the ball when asked. It made all the difference in the world to her to know that here, there’s an endless supply of tennis balls. Now she gets to play fetch (a game she loves) as much as she wants. Even when she’s not chasing her tennis ball, Puma never goes anywhere without it.

Although Puma may never have lived in a true home of her own, she gets the next best thing by living at the Sanctuary, which includes short vacations to real homes when Dogtown caregivers take her on sleepovers. Puma has proved to be a model citizen. She never has accidents or chews on things, and she stays right by her caregiver’s side, especially when it’s time to hang out on the couch. Then Puma seizes the opportunity for extra snuggling, inching closer to her person while giving soft kisses.

Besides extra love and affection, sleepovers give Puma deeper rest and relaxation. “At the Sanctuary she’s always running around,” says Dogtown caregiver Paul Lindley. “But in a home she relaxes and enjoys the peace and quiet.” It has helped her to bond more strongly with her caregivers and to trust people more, which helps her to be less shy and more confident around strangers. 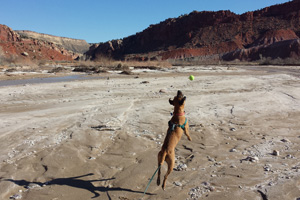 The biggest change for Puma over the years is how she reacts to other dogs. Known for being a bit testy with her canine counterparts, Puma still has her own solo space at the Sanctuary, but lately she’s finally interested in making some dog friends. One in particular, Sid, has some trouble getting around, but Puma thinks he’s perfect and loves having play dates with him.

In addition to play dates with Sid, Puma loves digging in the dirt in her yard and the dog park, and going on outings with her caregivers. Her favorite adventure is exploring the wilderness, and finding water to splash around in. On a recent trip to the Paria River near the Sanctuary, Puma waded right in to retrieve her tennis ball, proving she doesn’t yet have any intention of slowing down.

To bring hope and healing to more animals like Puma, support our work.