Image
A tabby cat, who ended up in a shelter, was unhappy. It took time for this anxious, hissing cat to relax and for her attitude to improve. But it did.
By Christelle L. Del Prete 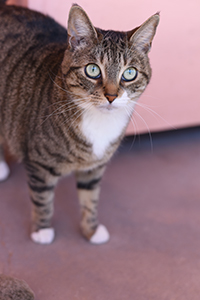 Before she came to the Sanctuary, Alexa had a terrible time making a good first impression. People who met her often walked away thinking she was unfriendly, even mean. In reality, the little brown tabby with the white paws was an anxious cat. After losing her home and ending up at a shelter, she felt a bit lost and angry at the world. She was also scared of strangers. Though it wasn’t her fault, her nasty cat attitude wasn’t winning her any friends, and it was her biggest obstacle to finding a home.

No home for hissing cat

Once Alexa found a safe place with a rescue group, she became a regular at adoption events. But the result was always the same. People were looking to adopt social cats and Alexa spent most of her time hiding in the back of her carrier. Once in a while she’d summon up the courage to go to the front of her enclosure and ask for attention. But whenever anyone tried to pet her, she would turn into a swatting, hissing cat.

Alexa’s chances of finding someone willing to bring her home and work with her were slim. Changing a cat’s behavior is a commitment that requires lots of time and patience, and Alexa didn’t seem willing to cooperate.

That Alexa was hard to handle at adoption events was one thing. But the worst part was that she was so stressed and unhappy. She didn’t understand that the goal was to help her find a loving new home. All she knew was that she was afraid of people and that new situations scared her. She needed a stable environment where she could settle in and relax. And Cat World at the Sanctuary turned out to be just the right place.

When Alexa first arrived at Best Friends, it was more of the same. Scared and standoffish, she didn't want to be around people or other cats, and she’d lash out if anyone got too close to her. Whenever someone needed to put her in a carrier, say for a visit to the vet, Alexa didn’t just resist. She morphed into a feisty little fighter.

But that wouldn’t do. Alexa has feline leukemia (FeLV), a virus that weakens cats’ immune systems and makes them more susceptible to secondary infections. Cats with FeLV need more frequent veterinary checkups than those who don’t have the virus. And vet visits normally require a cat to be transported in a carrier. It was something Alexa’s caregivers would have to help her with — when she was ready. 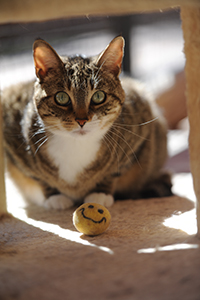 Fortunately, as soon as Alexa settled into her room at Cat World and began to feel comfortable, her behavior began to change. Caregivers were careful to give her space and to show her respect. They wanted to get to know her and to win her over without making her feel cornered or uncomfortable. Treats helped Alexa understand that people mean good things. After only a few weeks, she relaxed enough to let people approach her without hissing or raising her paw defensively. She seemed to be giving the signal that she was ready to make friends.

Taking their cues from Alexa, caregivers slowly began getting her used to their touch. The people she’s come to know and to trust can now pick her up and walk a few feet with her in their arms. After this exercise, Alexa gets rewarded with some tasty treats. But the true reward will come when she gains enough confidence and trust to enjoy more and more new things without feeling stressed.

Learn all about Cat World at Best Friends

Slowly but surely, Alexa is getting there. She’s still a bit unsure about new people, so she prefers that they go slowly with her and be as calm as possible around her. But she’s come to appreciate having her cheeks and her head petted, and she starts to purr softly when she feels a gentle touch.

As it turns out, Alexa just needed to feel at home before she could show that she's ready for one. Now when people meet her, they see a shy but friendly cat who will certainly be just the right pet for someone. Alexa’s new attitude marks a transition that her caregivers say is “truly remarkable.” And, as far as first impressions go, it’s one of the best.