Some cats are content to lie around all day with only a few “breaks” for exercise and play, but not Lightfoot. He’s extremely smart and energetic, and he likes to stay entertained.

But even walks outdoors, attention from visitors, volunteers and his caregivers, access to the spacious lobby in Cat World headquarters and clicker training sessions weren’t enough for this smart kitty. He wasn’t feeling well when he arrived at the Sanctuary, but since then he’s back in tip-top physical shape. Lightfoot has felt so good that he wanted more excitement in his life. And now, a unique way of approaching feeding time has turned into yet another way to keep this special cat happy. 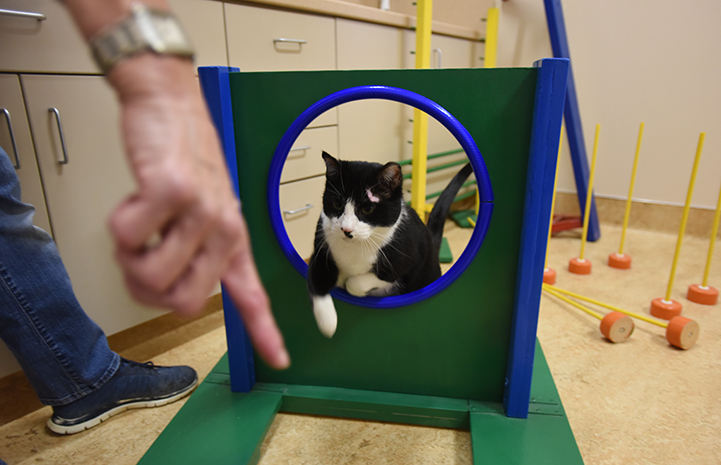 Help for a former community cat

Though he is barely five years old, Lightfoot looked much older a year ago when he arrived at the Sanctuary through the Best Friends cat initiative program. The Sanctuary was quite a change, since he’d lived most of his life as a community cat. Sometimes called stray cats or feral cats, community cats are neighborhood cats who roam freely outdoors, while kind people feed them and look out for them. Luckily, someone was indeed looking out for Lightfoot and noticing his struggle.

The poor cat’s skin was painfully irritated all the time, leaving a patchwork of bald spots on his black fur. Once Lightfoot was at the Sanctuary, Best Friends vets found that he suffered from severe food allergies and quickly got him on the path to recovery through diet and medication. Today, Lightfoot feels and looks great.

As important as it is, physical health is only one part of our pets’ well-being. When cats like Lightfoot are brought in from outdoors, they are used to a bit more activity than your average housecat.

Jenn Corsun, manager of Cat World, says: “By bringing our​ cats inside and providing for all their needs, we are certainly making them safer and, often physically healthier. However, we are also taking away many sources of mental stimulation. Though many cats may seem fine simply lounging around, they often are not. Lack of mental stimulation can lead not just to obesity, but also to depression and to various behavior issues. This is why it is so important to provide mental exercise as well as physical exercise for our indoor-only cats — to ensure they have the best quality of life.”

Once Lightfoot was feeling better, he let his caregivers know that he needed more of that mental exercise. He had no problem complaining loudly whenever he felt bored — even if it was right after a walk or a snuggle session. He also had a tendency to overeat whenever boredom struck — something that was starting to affect his weight. 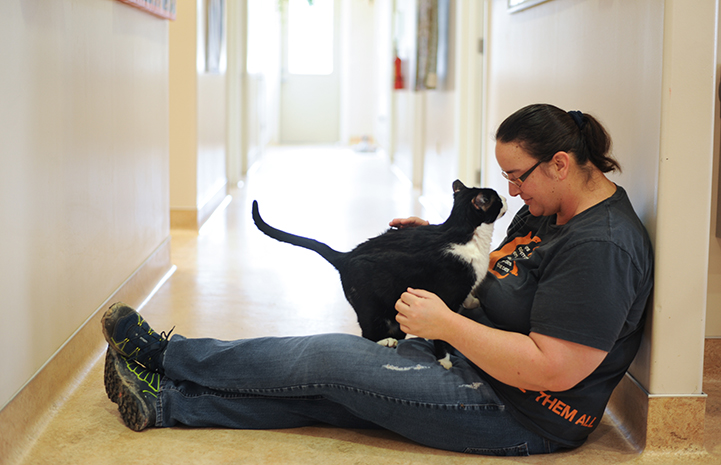 Since Lightfoot naturally turned to food when he felt restless, Cat World caregivers saw an opportunity to turn one of his meal times into a fun hide-and-seek game. Enter the NoBowl feeding system. It’s a food puzzle feeder for cats that includes a number of separate mouse-shaped pockets. Caregivers fill the pockets with dry cat food and Lightfoot has to shake, toss and bat each pouch around to get the food out.

First, though, he has to find his food. Searching for each food-filled pocket is great enrichment for cats, since they have a natural instinct to seek out their food. And since Lightfoot really likes food, he caught onto the game quickly. Before he comes out of his room each morning, caregivers hide six or seven of the feline puzzle toys in different places around the Cat World headquarters lobby. As soon as they’re hidden, Lightfoot comes out and goes right to work finding them. 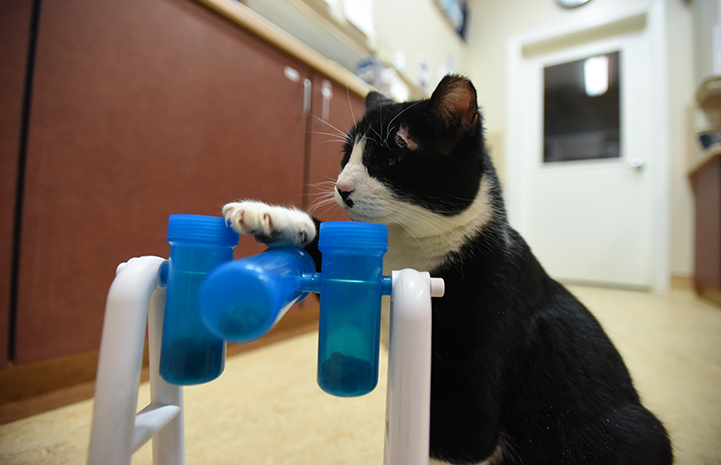 A healthy mind and body

How quickly he finds the “mice” depends on how hungry he is. If he has already eaten most of the wet food he gets each morning, Lightfoot might mosey around the lobby nibbling a few pieces of kibble from each of the feeders, or he might find only a few of them and leave the rest for later. He usually saves the one hidden in a big cat tree for last, because then he can lounge around in the tree and snack at his leisure.

If he’s hungry, he can find all of them in 10 minutes flat. He may or may not save room for dinner, but he’s no longer eating just because he’s bored. He’s in it for the thrill of the chase, as well as the tasty reward.

But the best thing about playing this hide-and-seek game is that meal times no longer just fill Lightfoot’s belly. They help him get the all the enrichment he needs to keep his mind as healthy as his body.