Image
Peridot seemed crabby at first, but her with patience and care she's showing her friendly side.
By Sarah Thornton

Peridot simply didn’t trust anyone enough to tolerate any more interaction than that. But one of her caregivers decided to set a personal goal: Help Peridot feel safe and open up at her own pace with plenty of treats. And, so far, she’s has been exceeding expectations.

A scared, stressed cat lashes out

Orphaned at a very young age, Peridot the kitten had to be bottle-fed. Humans were the only family she’d ever really known. But when her people were no longer able to care for her, she suddenly found herself in a shelter with sights, sounds and smells she was completely unfamiliar with. Confined and scared, she started lashing out at people. And she didn’t like having other cats around her at all, and she made that perfectly clear by screaming, yowling and hissing at them. It was stressful for everyone involved, especially Peridot herself.

What she needed was space and time to unwind, along with people who could help her feel safe again so that she would have the best chance at finding a new home. At Best Friends Animal Sanctuary, she was set up in a quiet room with her own catio and no roommates. The private space helped (not having to worry about other cats), but she still wasn’t sure about people.

She had hiding spots and places where she could climb up to get away from visitors, but sometimes interaction was inevitable. While caregivers cleaned, she went after their feet, and if anyone tried to touch her she would still hiss and bat them away.

On the other hand, sometimes she would seek out affection — lightly head-butting an outstretched hand or winding around someone’s ankles. When it was on her own terms, she wanted the attention. And caregiver Ashley McDaniel was determined to encourage those moments, build on them and get Peridot to a place where that was her norm rather than her exception. 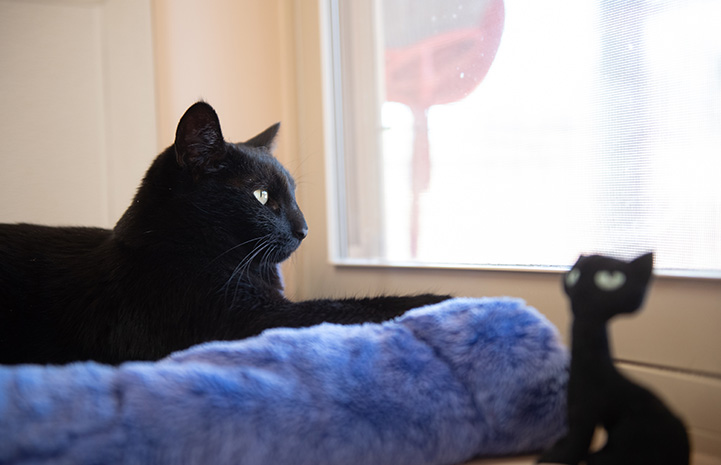 Slow and steady wins the cat

Ashley wrote up a plan for Peridot: She’d work with her every day, slowly building up their bond and showing the little black cat that spending more time with people was good and enjoyable. She set up monthly goals, but everything would be on Peridot’s own timeline.

“When I first started working with her, I couldn’t touch her,” Ashley says. “I would just go into her room, sit down, talk with her for 10 minutes and then leave. I just wanted her to get used to me.” (Sometimes she played relaxing music to fill the silence.)

There was no pressure for Peridot to come close or be approached at all — just quiet company and a chance for her to observe at her leisure the person in her space. Then, once Peridot was feeling OK with that, it was time to introduce the clicker.

“She’s a really smart cat,” says Ashley, “and she’s really treat-motivated, which is good.” With a pocket full of yummy snacks and a clicker in hand, Ashley and Peridot’s quiet sit-downs became perfect opportunities to build those positive interactions. Occasionally as she was talking, Ashley held out her hand, and if Peridot rubbed against it or touched it politely, she got a click and a treat. 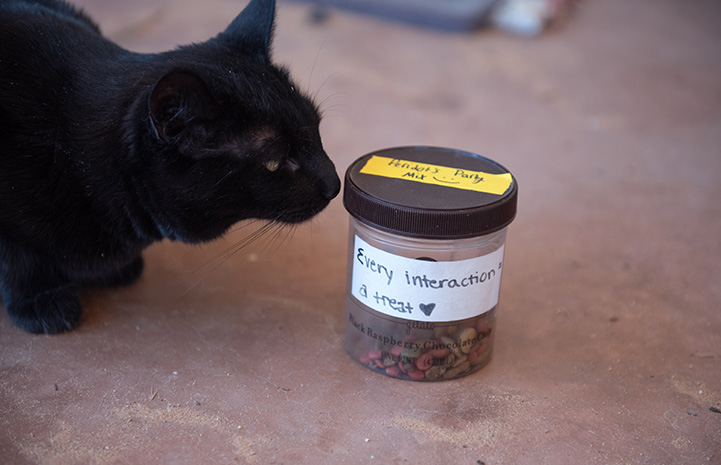 It didn’t take Peridot long to figure that out. Not only was the little touch nice on its own, but more pats also meant more snacks. It was so easy a kitten could do it. Soon, they had moved on to full head-to-tail strokes in return for a treat. And she completely got into it. In almost no time at all, she had surpassed Ashley’s first- and second-month goals.

“I do the clicker training now sometimes just to keep her familiar with it,” Ashley explains, “but she’s not as food-motivated anymore. She’s more affection-motivated now. It gets tricky (because) she gets in different moods. Some days she’s not in the mood to be super affectionate, so that’s a good day to do the clicker training. But if she’s already in a super affectionate mood, then the petting is her reward.”

Bee McCarroll, another of Peridot’s caregivers, observes, “Now you go to give her a treat and she wants to be petted, so that’s pretty cool.”

Peridot still has moments where she wants her space. (Don’t we all?) And she’s not afraid to let her human friends know. But now she has human friends. With the people she’s come to trust (much more often than not), she simply wants love. 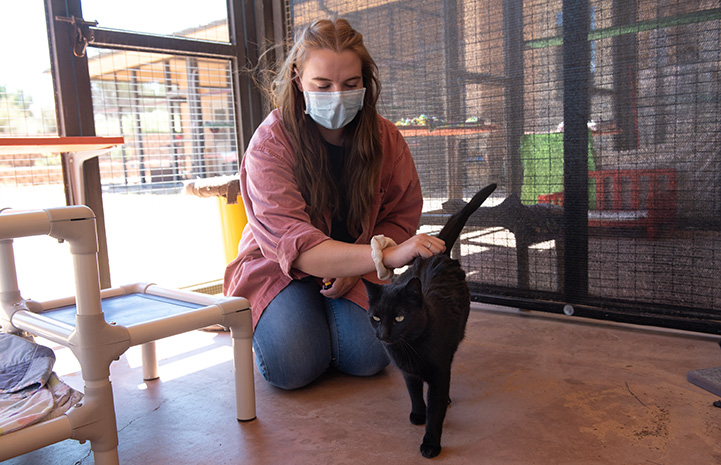 When Peridot got to the point where she was comfortable with her primary caregivers entering her space, petting her a bit and then leaving, it was time to start branching out. Ashley has begun asking others to spend time with Peridot to get her used to even more people. Every positive interaction with a new person makes the next one easier.

Peridot also goes out on stroller rides for a change of scenery and a chance to people- and cat-watch from a comfortable distance. Once back in her room, she gets some alone time, so she doesn’t feel too overstimulated. And then it’s back to business (and skritches) as usual.

Ashley says there’s one habit Peridot hasn’t yet broken — her grumbling and growling — though, she’s quick to point out that it really does seem to be more habit than intentional. “The other day,” she recalls with a laugh, “she was on my lap, I was petting her, she was making biscuits … and the whole time she was growling.”

Things have started turning around for Peridot. She has someone she trusts, who understands her boundaries and takes the time to show her that people aren’t all that bad. “She’s such a fun cat, she has such a big personality,” says Ashley. “She just needs respect and to feel safe. With the cats who are harder to interact with, it’s so much more special when they do let you have a moment with them. It’s really rewarding.”

Ashley’s next goal for Peridot? That would be seeing her get adopted and go home to a new loving and understanding family. 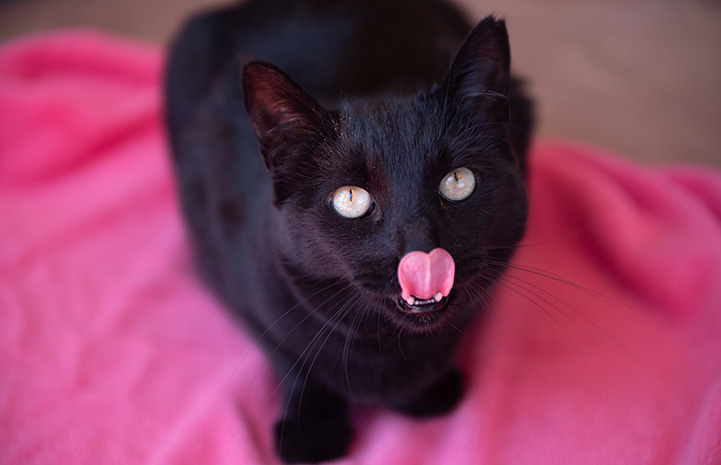 It’s not just Peridot looking for a new home. Pets near you are ready to take that next step, too. And you can get a fabulous furry family member out of it.

From two legs to four, a kitten’s journey