Image
Man adopts a second cat from who had been adopted from the feline hoarding situation in Pahrump, Nevada. His two cats are getting along.
By David Dickson

When Garry Gabrielle first met Andrew several years ago, he didn’t guess at the time that he was meeting a cat who would later become a big part of his life. Andrew, quite overweight at this first chance meeting, was out on a walk with a caregiver as part of a weight loss program. While Garry didn’t feel a strong connection right away, for some reason the experience left an impression he didn’t forget. "I can still see him out on that leash," Garry says. 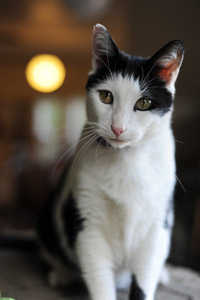 Garry returned some time later — around two years ago — and spent more time with Andrew. Garry was beginning to feel a closeness with Andrew, and not only because of Andrew’s devilish good looks and charming ways. Garry has a soft spot for all the cats who share Andrew’s rough background.

Andrew came to Best Friends from a hoarding situation in Pahrump, Nevada. Hundreds of cats were living in horrible conditions, with nowhere near enough food. Some of the cats were so sick they could hardly stand up. The Great Kitty Rescue, as it came to be called, was how Garry learned about Best Friends (Best Friends helped rescue the cats from that situation). "After what these cats have been through, they deserve so much," Garry says.

He’s certainly been willing to do what he can for the Pahrump cats. In addition to traveling and volunteering his time with them, Garry has adopted four Pahrump cats from Best Friends.

Garry lives in a small town off of Lake Winnipegosis in Canada. Back home, one of the Pahrump cats he adopted, Delilah, didn’t have a friend. And this was only because she didn’t want to interact with any of the other cats. Back at Best Friends, she’d earned a reputation for being a bit of a boss. Funny thing, though, so did Andrew. They knew each other back at the Sanctuary, and could actually get along in a sort of mutual respect. 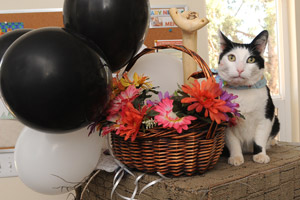 After thinking about Andrew for years, Garry decided it was time to adopt him, both to see if Delilah would accept him as a friend, and to give Andrew the chance at living in a home all his own. "I’ve noticed as we get older, things are just things," Garry says. "Living animals mean more." He wanted to make cats an even bigger priority in his life.

Back at Best Friends, caregivers and volunteers were ecstatic at Garry’s decision. Over the years, Andrew has become one popular guy among staffers and volunteers. When it was time for him to head home, caregivers threw a massive black-and-white-themed party for him, with all decorations and treats matching Andrew’s tuxedo coloring.

A brand-new start for a cat

Andrew has settled in wonderfully at his new home. When he met up with Delilah after a three-year absence, she walked over, sniffed him a couple times, hissed, and walked unceremoniously back to her bed. For Delilah, that was the equivalent of a welcome-home bear hug. "They’re getting along," Garry says. Sometimes, having two bosses in the room actually works out when nothing else will.

For his part, Andrew is thriving with all the attention of home life and soaking up all the TLC that comes his way. "He’s actually a very cuddly cat," says Garry.

In the end, it may have taken several years before the timing worked out, but Andrew obviously made a lasting first impression with someone special when it really counted.

Andrew’s happy ending wouldn’t have been possible without the support of generous members. Please consider donating to the animals today.