Image
Rexie Roo's front legs were amputated after a serious injury, but not only is he fully recovered, he's loving his new home.
By Nicole Hamilton

When Danielle Barnhart first brought home a little tuxedo cat named Rexie Roo to foster, she kept him in her bathroom until he could get used to his new surroundings. In the beginning, he was content to rest in the small space, but then one night, Danielle heard him meowing at the door.

When she opened it, Rexie Roo walked past her down the hallway and into her bedroom, while she watched in disbelief. You see, Rexie Roo is just like other cats except for one thing: He lives life on two legs instead of four.

“He’d never walked more than a foot or two before,” says Danielle, who’s a Best Friends foster coordinator in Salt Lake City, Utah. She began letting him sleep in a cat bed next to her bed — that is, until one night she woke up to see him sleeping beside her.

Ever since the night he arrived at a rural shelter in Utah with serious injuries (likely from being hit by a car), Rexie Roo has been defying the odds. It didn’t look good for him back then. He had two broken legs, he was far too skinny, his fur looked like a tuxedo in shambles, and he had no microchip or any other way of finding out where he’d been living. He had FIV (feline immunodeficiency virus) and was yet to be neutered.

Unless the shelter staff could place Rexie Roo where he could get emergency medical care ASAP, the next best option would be to humanely euthanize him. But they wanted to at least give him a chance, so they put out a plea for help. The team at Best Friends in Utah answered and was soon on the road to go get Rexie Roo.

He wasn’t in the clear just yet, though. After arriving at the Best Friends Lifesaving Center in Salt Lake City, a medical examination revealed that his front legs were crushed in several places and they were infected. In order to save his life, his front legs would have to be amputated. 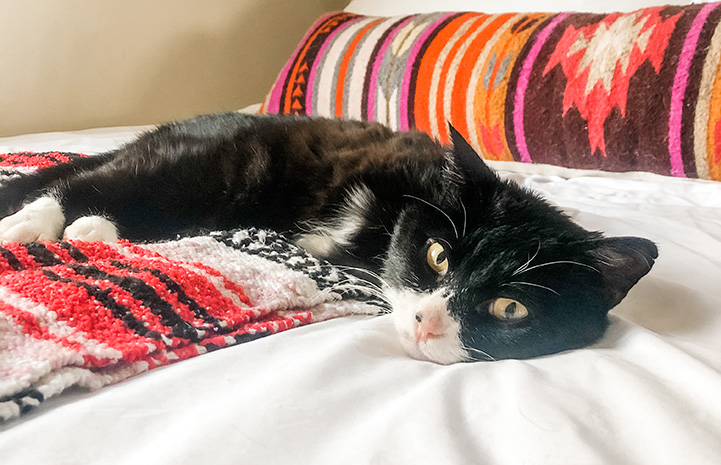 Foster homes help cat land on his own two feet 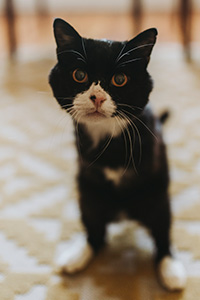 The surgery was successful and after a few days of recovery, Rexie Roo went to live in a foster home with Megan McCloud, a lifesaving support lead for Best Friends in Salt Lake City. It wasn’t easy at first. He was on a lot of medication to fight infection and manage his pain and Megan had to carry him to the litter box and to his food. “It took about 10 days, but then he started purring,” Megan says.

He ate like a champ and found comfort in cuddling with Megan’s cat. He started to gain weight and for the first time since his rescue it looked like he was going to be OK. Once he was stronger and his incisions had healed, Rexie Roo went to Danielle’s home for the next stage of recovery: walking.

At first, Rexie Roo couldn’t walk more than a foot or two. “He doesn’t walk like a T-Rex, but he does lift his torso off the ground,” says Danielle, who helped him learn how to get around with the help of treats. “Luckily, he is very food motivated,” she says. “We were able to get him to start walking by luring him with treats, putting his food bowl a little bit out of reach and giving him a treat-dispensing ball that he pushed around with his nose.”

Soon Rexie Roo was hopping around the house with confidence. He figured out how to get in and out of the litter box on his own, and could even jump up onto the couch by himself. All that, plus his A-plus personality meant one thing: He was ready for a permanent home.

It didn’t take long for Cairistiona Flatley to see him on Instagram and fall in love. She had been looking for a companion for her cat, KeeKee, who she adopted from Best Friends a couple of years ago. “As soon as I saw his photo and read about his past, I knew I wanted to adopt him,” she says.

The timing worked out, too. Since most places in Salt Lake City were shuttered because of the coronavirus, Cairistiona would be home more often to help Rexie Roo acclimate to his new space. So, she contacted the Best Friends team to discuss Rexie Roo’s special needs.

The very next day, she donned mask and gloves and visited the center. Luckily, social distancing rules don’t apply to pets, and as soon as she scooped up Rexie Roo in her arms, she knew she’d be bringing him home that day. 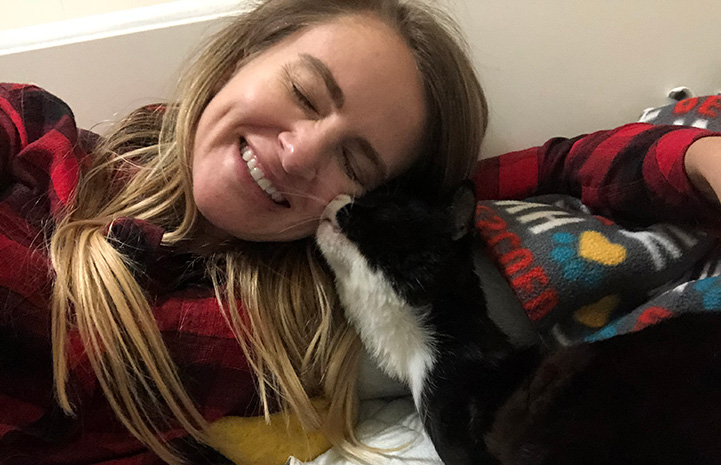 “He is amazing,” says Cairistiona. “He already made so much progress at Best Friends and he keeps getting stronger by the day.” In fact, Rexie Roo is getting so strong that he can even jump up on Cairistiona’s bed, but what’s still a bit tricky for him is getting back down. To make sure he stays safe, she keeps a close eye on him and tries to intercept his jumps so he can land gently. She’s also building ramps to make his descent safer.

For now, Rexie Roo uses a flat pan as a litter box, but Cairistiona has plans to transition him to a regular litter box that he can use with the help of a ramp. He also gets along well with KeeKee. “We’re making it work,” she says. “Right now, we’re one big happy family.”

At the rate Rexie Roo is getting around, Cairistiona fully expects that in no time he’ll be able to navigate her apartment as easily as a cat with four legs. As for adopting a cat with special needs, she never gave it second thought. If anything, it made her want to adopt Rexie Roo more.

“Everyone has their own issues,” says Cairistiona. “To me, he’s extra special. People are drawn to him because he is so resilient. He has been through so much, and yet he remains the sweetest animal I’ve ever met.”

Donate and help a cat near you defy the odds 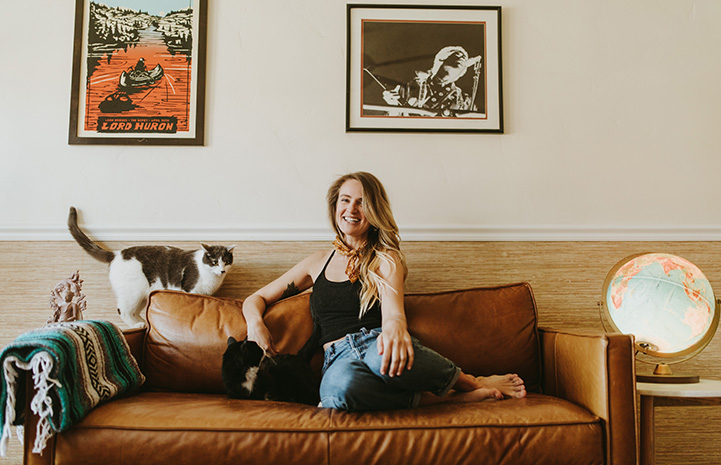 Photos by Angie Petty, apettyphoto, and courtesy of Cairisti Flatley