Image
Feline who loves naps was adopted at Harlem pet adoption event. He is helping his new family heal from the loss of their senior cat.
By Nicole Hamilton

Sometimes things don’t turn out quite as expected. They turn out a lot better.

Best Friends–New York works collaboratively with city shelters, local animal welfare organizations and individuals to save the lives of pets in shelters in New York City and the surrounding tri-state area. As part of this work, Best Friends hosts adoption and fundraising events, and runs a lifesaving foster program in partnership with Animal Care Centers of NYC. bestfriendsny.org

Take what happened to Mr. Peace, for example. For starters, he wasn’t expecting to be at a Brooklyn PetSmart for a recent Best Friends–New York adoption event, but when the staff found space for one more pet at that day, they decided to bring Mr. Peace, who was used to going to adoption events in Harlem.

To Mr. Peace, who was surrendered by his former family to Animal Care Centers of NYC before coming to Best Friends, it was just another day ― which may have been why he decided the adoption event was a great excuse to take a nap. After all, Mr. Peace had been attending Best Friends adoptions events for months, and he still hadn’t been adopted.

In fact, his love of naps was probably part of the reason he hadn’t yet been adopted — even though he’s a great cat. Jeanette McManus, adoption specialist at Best Friends–New York says: “He loves people, he’s very affectionate, and he loves to play. But he likes to sleep at adoption events.”

It’s a good thing he woke up when he did that day. Because if he had kept on snoozing, he never would have met the person who would change his life in a big way.

A day to remember one special cat, and meet another

Samantha Sampson and her mom weren’t planning on stopping in at the Brooklyn PetSmart the day Mr. Peace was there. In fact, they were already on their way with friends to a nearby cat café. The two were still grieving the loss of their beloved 14-year-old cat, Sunshine, who had recently passed away from lymphoma. They hoped the visit would lift their spirits.

Wanting to make the unscheduled trip brief, Samantha and her mom made their way to the Best Friends adoption area in PetSmart — just for a quick meet and greet with the cats. Mr. Peace caught Samantha’s eye right away. And when he heard Samantha’s voice, he did something completely out of character: He woke up.

“He reached out his paw to me and I thought it was the cutest thing,” says Samantha. “I was taken aback by his sweet and friendly personality.” 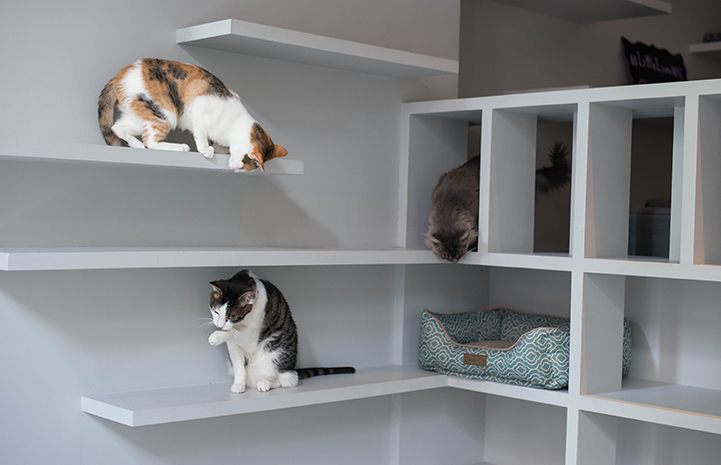 Samantha and her mom always said that when it was time to welcome a new cat into the family, Sunshine would give them a sign. So, as Samantha picked up Mr. Peace, she started feeling like maybe this was it. But she wasn’t sure.

She went to lunch at the cat café, and while surrounded by perfectly wonderful cats looking for a home, she noticed that none compared to Mr. Peace. And so after lunch, her mom suggested they return to PetSmart to see Mr. Peace again. If he was to be the family’s new cat, Sunshine would let them know.

When they arrived, Samantha’s heart sank. Mr. Peace was not where she left him. Worried that she might have missed him, she searched until she found him in a carrier, waiting while the Best Friends team packed up to leave. At that moment, Samantha realized that this was in fact the sign she was waiting for. That day, Mr. Peace finally got what he’d been waiting for: a home.

Mr. Peace went home just in time for the holidays, where he received not only the gift of a new family, but a new name, too. Now Mr. Peace is known as Brooklyn to remind them of the place where they met him, and also because he has very discriminating taste in food. He’d fit right in at any trendy Brooklyn eatery.

“We got him special treats at Thanksgiving,” says Samantha. “We didn’t want him to feel left out.” And he’s gotten special consideration for Christmas, too, because Samantha bought him his very own Christmas tree.

If there’s one good reason why Samantha gives Brooklyn so much love, it’s because Brooklyn has given Samantha and her family a lot of love in return. And he’s also helping them heal from their loss.

“Sunshine’s passing was so very difficult,” says Samantha. “But I think he was up there the day we met Brooklyn. He gave him the nudge he needed.”

Give the perfect gift. Donate in honor of a special person or pet. 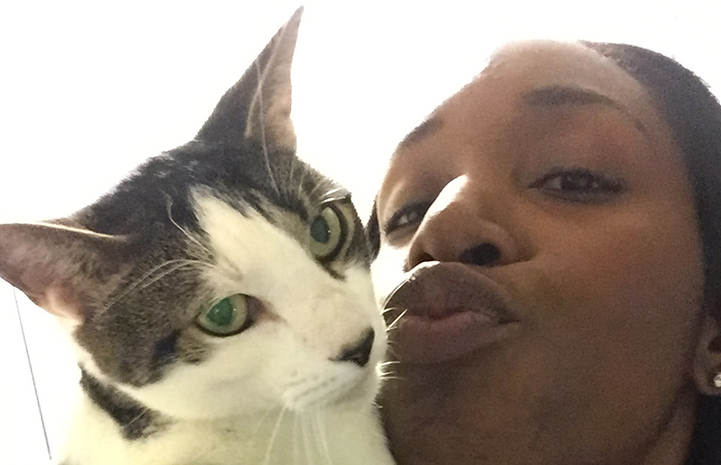