Cat with a neurological condition goes home to his No. 1 fan

Image
Cat with a neurological condition that makes him wobbly finds the perfect home with a woman who continues his strength training and physical therapy.
By Christelle L. Del Prete

Ask anyone who’s volunteered at Quincy House, and they’ll tell you it’s a very special place. It’s one of the areas at Best Friends Animal Sanctuary that special-needs cats call home. Not all Quincy House cats have special needs, but they all make quite an impression. Most folks can name at least one cat who touched their hearts during a visit or volunteer shift. Duke was one of the cats people mentioned time and again. It seemed like those who meet him never forget him.

A fan club for a cat with a neurological condition

During the years he lived at Best Friends, Duke had a fan club of devoted caregivers and veterinarians, as well as volunteers who returned to the Sanctuary just to spend time with him. These loyal friends would stop at nothing to help Duke live a happy life by overcoming the challenges of a neurological condition. One of them even designed and built a mobility cart to help him to get around better and grow stronger. 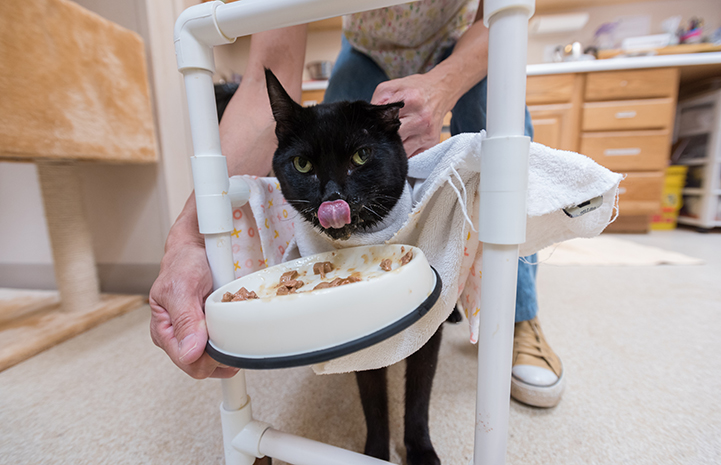 At the Sanctuary, Duke was surrounded by people who loved and supported him, and there would be a spot at Cat World for him for as long as he needed it. But Duke deserved a home of his own, and his biggest fan was determined to adopt him someday. After forming an unbreakable bond at the Sanctuary, Duke and his person were separated, but their love story has a happy ending. Duke is home at last, and he’s so content that he can’t stop purring.

Helping a cat with mobility challenges

It’s not hard to understand why Duke was so popular at Cat World. He has an incredible can-do spirit in the face of physical challenges. Because of his condition, he is unsteady on his feet, and sometimes he’ll fall while walking. At other times, he needs help eating or getting to the litter box.

While his condition has never stopped him, Duke definitely needed help when he first arrived at the Sanctuary. He seemed physically uncomfortable, and he would get frustrated when he couldn’t get were he wanted to go quickly enough. That frustration made him grumpy, so he kept to himself and was standoffish with people and other cats. But Best Friends vets put him on medication that helps to ease chronic pain, and that’s when things started to turn around. 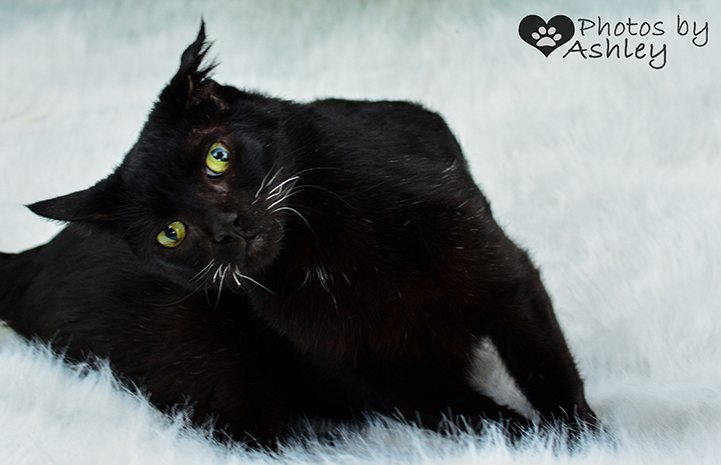 Once his pain went away, Duke became more comfortable than ever before. He gained better control over his movements, which meant that he could get around more easily, use the litter box on his own, and (perhaps for the first time in his life) groom himself. Because he felt better, his mood also improved and he started making friends. 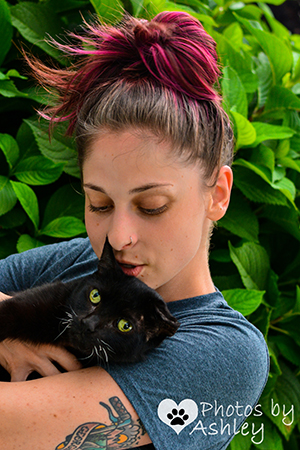 Jade Campbell became Duke’s best friend while she worked as a Cat World caregiver. The strong-willed black cat was her shadow at Quincy House. He followed her all around the lobby where he lived. When she was busy working in the other rooms, he would wait patiently outside the door for her.

Duke has a strong independent streak, and he would sometimes get a bit crabby when people tried to help him do things. But even when he was feeling feisty, he’d happily allow Jade to help him at mealtimes, when he needed to use the litter box and when he needed his physical therapy.

Though Duke had other Cat World caregivers and volunteers who he adored and relied on for care, his bond with Jade was special.

Jade says she wanted to adopt Duke since meeting him after becoming a Best Friends cat caregiver in February of 2014. Eager to share the knowledge she’d gained at the Sanctuary with local rescue groups in her home state, she returned to Pennsylvania a few years later.

Even though Jade couldn’t take Duke with her at first, there was never any question that she would adopt him when the time was right. The stars aligned when a space opened in Jade’s home, and she knew that only Duke could fill it. Soon, he was on his way home to Pennsylvania.

“He was at the Sanctuary for eight years, and he was known to be a little sour patch kid — sour, then sweet,” says Jade. “Here at home, he hasn’t stopped purring.” 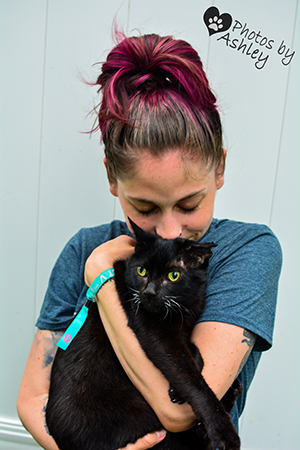 Besides his nonstop purring, Duke shows his contentment by eating well and faithfully using the litter box — something he didn’t always do at the Sanctuary. Jade has continued doing strength training and physical therapy with him, including assisted walking and leg exercises. His mobility cart also went home with him, and Jade got him a special harness that helps him walk with her assistance.

“I know he’ll never be like most cats, but that’s OK,” says Jade. “His wobbliness is one of the reasons I fell so deeply in love with him.”

Duke is nine years old now and enjoying his golden years at home with his best friend and No. 1 fan. But that doesn’t mean he’s done inspiring people. Duke’s can-do attitude is alive and well at Quincy House. Cat World caregivers, visitors and volunteers see it every day in cats living happy lives, despite physical challenges and special needs.

If there’s one thing Duke’s taught people, it’s that no matter what obstacles life may throw into our path, love, patience and the right attitude can help us overcome them. 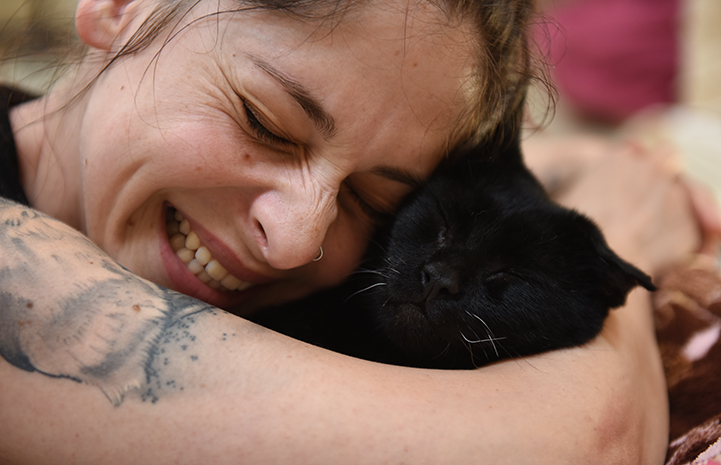 Photos by Molly Wald and courtesy of Ashley Croston