Image
At first, Agent the cat didn't like the idea of wearing a harness and going for a walk outside. That has all changed now.
By David Dickson

Mother knows best, as the saying goes. And while kids don’t always see the point of brushing teeth at bedtime or finishing broccoli before dessert, more often than not Mom’s wisdom shines through with time.

Similarly, Best Friends caregiver Kelly Dudzik knew if she could just convince Agent the cat to wear a walking harness, a whole new world might open up for him. As for Agent, he was having none of it.

Attempting to get a cat to go for a walk 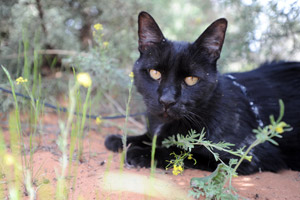 "It was bad," says Kelly of the first time she put a harness on Agent. It took Kelly, along with cat staffer Robin Jackson, a full 15 minutes to get past the hissing, swiping, and overall tantrum that Agent threw when they showed up with the harness.

Kelly was undeterred. "None of them like the harness in the beginning," she points out. "I just wanted to get him outside."

You see, Agent was beginning to act mopey. He’d been lying around more than usual, and behaving irritably toward other cats, especially a cat named Bogart. For some reason, Bogart has always had a knack for pushing Agent’s buttons. Lately, though, Agent was even more short-fused.

Kelly figured if she could start taking Agent on walks outside, he’d find a new spark for life. A fine theory, yet first she had to get past the harness obstacle. Thank goodness he enjoyed the outings. "He actually liked being outside right away," says Kelly.

Putting a harness on a cat 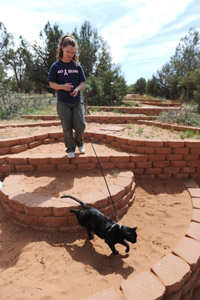 The hard work paid off.

While the reward was something he valued, Agent didn’t connect the dots right away that wearing a harness meant going for walks. They still had ground to cover. Kelly tried leaving the harness inside his room, for example, in hopes he’d get used to it that way. Nope. Agent actually attacked the thing. Obviously, this was going to be a journey.

"I just kept going," she says. "Every day I’d put the harness on him. It got much quicker each time." She started using spray catnip during the harness sessions, which was a big help. That magical elixir mellowed him. She also had Agent wear the harness during the day, which he didn’t seem to mind once it was on.

All the hard work paid off. Caregivers can now harness him up without incident. As for the walks, he’s in paradise every time he sets foot out the door. "He loves being outside," Kelly says. He chases bugs and lizards, explores, even has a favorite bush he likes to sit by and watch the world from. Volunteers can take him for walks, too. The longer the better, as far as he’s concerned. 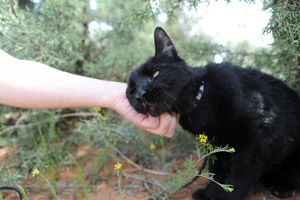 He's ready for a home of his own.

As caregivers hoped, Agent’s attitude has improved dramatically back in his play area. "Now Bogart can sit next to him and he’s OK with it," says Kelly. He’s more relaxed and definitely ready for a home all his own. "He’s the best cat," Kelly says.