Image
Cat with panleukopenia, who had an upper respiratory infection and then diarrhea, is saved after receiving a blood transfusion from other cats.
By Best Friends staff

Since it opened in January of 2012, the Best Friends Pet Adoption and Spay/Neuter Center in Los Angeles has saved over 5,000 animals. Each of those 5,000 has four paws, a furry body, two ears, and a wet nose or whiskers. Even though there are hundreds of animals on site at all times, and the goal is to move animals in and out as quickly as possible into new homes, the staff is willing to go the extra mile to save a single life.

Almost immediately after Lulu the cat arrived at the adoption center, the staff was concerned about her. Robin Burger, cat caregiver, says, "At first, Lulu was just not well. We treated her for upper respiratory, but then she started having diarrhea. As soon as that happened, we tested her for panleukopenia, and it came up positive." This was a shock because the virus, often deadly, is usually seen in under-vaccinated kittens. But Lulu was a young adult cat, not a kitten. Even so, the virus hit her hard.

They immediately moved the petite cat into isolation because she was extremely contagious. There, Robin says, they began IV fluids and antibiotics. She explains, "Once a cat has panleukopenia, you have to let it run its course. Their immune systems become so weak that they get a host of other illnesses and problems, so you treat with antibiotics, hoping to keep them strong enough to fight off the virus." Because there is no cure, there wasn't anything else they could do but keep Lulu's strength up so her body could heal itself.

But then Lulu started showing signs of severe internal bleeding, and that's when they knew she was failing. The clinic staff evaluated her and determined that there was no way she could beat the virus if she was too anemic. Robin says, "Once the disease gets to that point, you have to look at whether it's more humane to euthanize." But Rita, the clinic manager, had one more thing to try. She called around to other clinics searching for plasma to give Lulu a transfusion. When she couldn't find any available and time was running out, they turned to an in-house solution: blood donor kitties.

Robin explains transfusions in cats like this: "Unlike humans, cats' blood is pretty universal. You find a big enough cat, pull out blood, and transfuse it like you would anything else." With dozens of cats at the center waiting for adoption, they had plenty to pick from. Two cats, Henri and Simba, were chosen because they were big, sleek cats with laid-back attitudes.

Lulu had her first transfusion and immediately perked up. After another transfusion a few days later, she was on the upswing. It wasn't long before they knew she'd pull through. 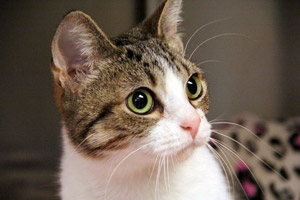 Soon, Lulu was well enough to be spayed, and she graduated from the isolation ward to the adoption floor. After her time alone in the isolation room, Lulu must have been happy to be around other cats and more people again. Robin says, "She was very talkative and came right to the front of her enclosure. She worked it." She was adopted almost instantly.

Robin says it was Rita's quick thinking and willingness to work extra hard that saved Lulu's life. And Lulu's new family is grateful too. They sent a note that reads, "Thank you all for your caring. Lulu is quite a character. She runs through the house like crazy playing with her toys. She gets in the big windowsill and watches the birds. We love her more every day."

See all the cats and dogs looking for homes at the Best Friends Pet Adoption and Spay/Neuter Center.