Cat positive for FIV gives back

Image
FIV cat is adopted from Best Friends Animal Sanctuary. He and his new family then send the other cats at the Sanctuary gifts of toys, treats and more.
By David Dickson

Once upon a time, Handsome Devil the cat must have thought life had dealt him a raw deal. To be fair, he had every right to feel that way. He was one of the Pahrump cats from the Great Kitty Rescue, an absolutely terrible hoarding situation. When poor Handsome Devil came to Best Friends he was nothing but skin and bones, literally starving from lack of food and other basic needs. No doubt, when he remembers those days now, he can hardly believe how much better his life turned out in the long run.

Cat heals from a painful past

For starters, his quality of living improved by leaps and bounds when he came to the Sanctuary. He had all the tasty food, medical care, and TLC he could soak up. Not one to waste an opportunity, Handsome Devil soaked up plenty of all three as fast as he could. Before long he was really hitting his stride. The only thing left for him to hope for was a home of his own. 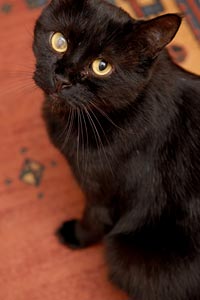 Handsome Devil is an FIV positive cat. There are several places for FIV cats at Best Friends, one of which is the Community Animal Assistance office building, Claudette’s Castle. The folks over at Community Animal Assistance have all FIV cats in their work space and they had room for another cat some time ago. Since there are cats, dogs, and even an office pig in there, the incoming cat needed to have a mellow personality to fill the niche. Handsome Devil fit the bill spot on. He’s as laid-back as a fence post.

Sure enough, his first day over at Claudette’s, he waltzed out and greeted all the other animals instantly. No hissing, no posturing. He just acted as if he’d lived there for years. Well, that laid-back personality ended up being the ticket to his own happy ever after.

Couple is smitten and want to adopt

Shellie and Doug Willis of Kansas City, Missouri, were looking on the Best Friends website and happened across a video of Handsome Devil in his play area. They were instantly smitten by this gorgeous black cat and his ability to get along with so many different animals. Doug and Shellie had five cats and two dogs of their own at the time and could imagine Handsome Devil fitting in perfectly with their group at home. They decided to adopt.

Similar to his first day at the office back at Best Friends, Handsome Devil walked into his new home from the very beginning as if he’d lived there always. He became fast friends with everybody in the house. "He really enjoys being in a home environment," says Shellie. "He especially loves to cuddle in bed at night!"

Life might have once dealt Handsome Devil a raw deal, true enough, but things didn’t stay that way forever. He now has a loving home and a bunch of new friends to play and cuddle with day and night. Doug and Shellie got to thinking about some of Handsome Devil’s office animal friends back at the Sanctuary. They felt like he would love to give his old pals a boost while they’re still waiting for their own forever homes.

Gifts for his feline friends

Which is why the animals at Claudette’s Castle were surprised recently at a stuffed-to-the-gills gift box that arrived addressed to the animals from Handsome Devil (now renamed Dewey, or Handsome Dewey).

Inside the massive gift box were treats, cat toys, dog toys, jackets, collars, some gorgeous and extremely comfortable handmade cat beds (made by Shellie), and even some sweet potato treats for Harley the office pig. The animals at Claudette’s have been enjoying the spoils ever since, not to mention the cat beds that are snoozed in constantly. Handsome Devil (aka Handsome Dewey) certainly knows how to make his friends feel even more loved.

"We wanted to send off a thank you and wish his friends luck in finding their homes," adds Shellie. "We just wanted to give back."