Image
Cat has a very bad reaction to his neuter surgery. He wakes up blind, deaf and stricken with neurological problems. He couldn't walk.
By Christelle L. Del Prete 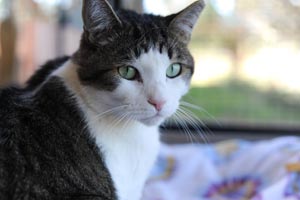 Tuffy is one tough cat. To survive and recover so well from what he’s been through, he would have to be.

One of several cats abandoned in a local community, Tuffy was rescued by a community (feral) cat caregiver and taken to a vet clinic to be neutered. There, he had a very unusual response to what normally is a very routine, safe procedure.

Cat with a strong will to survive

He woke up blind, deaf and stricken with neurological problems. He couldn’t walk.

For a while, it was unclear whether or not Tuffy would have a good-enough quality of life to continue. But he was young, showed a strong will to survive and was starting to eat and move around a bit more on his own. That’s when the community cat caregiver asked for help from Best Friends, which eventually brought Tuffy to Best Friends Animal Sanctuary.

At first, the effects from Tuffy’s emergency were quite pronounced. Though he could walk again, he had an unusual gait that caused his legs to swing out wide with each step. Because he couldn’t see, he would sometimes walk into walls, and he would meow loudly because he couldn’t hear his own voice.

But, just as Tuffy began to adjust to his condition, his vision, hearing and coordination improved — at first gradually, and then dramatically. Tuffy can now see large objects and shadows. If someone crouches in a doorway, for example, he can see well enough to navigate around them without having to feel his way through. 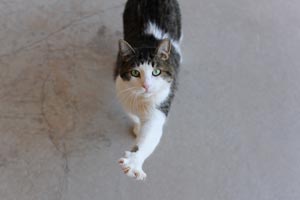 His meows are a little softer these days because he has regained some of his hearing. And, except for the slightest hitch, his wide, exaggerated stride has become a normal walk. When he wants to, he can move quite quickly across the lobby of the building where he lives, and can even climb up on things.

But Tuffy still has some special “needs,” or, rather, some strong preferences about where he spends his time. He loves curling up in small areas. Caregivers have dubbed the lobby closet “Tuffy’s penthouse suite,” and he demands that closet doors be kept open so he can explore them at his leisure. It’s Tuffy's very favorite place to be. He always sleeps in the same spot — on the bottom shelf in a box lined with a soft blanket provided by his caregivers.

Now that Tuffy has found his favorite hideaway, it may mean that people don’t get to see as much of him as they’d like. But they’re just happy that this cat, who is sweet and affectionate with everyone he meets, is alive and doing so well. If Tuffy is happiest curled up in his penthouse suite, no one seems to mind accommodating his wishes. He has truly earned the nickname “Miracle Cat.”

To help more animals like Tuffy get the royal treatment they deserve, become a Best Friends member.