Image
Cat whisperer Gail Takahata volunteers with cats all over the world: with animal groups in San Diego, at Best Friends Animal Sanctuary, and in Japan.
By Jennifer Hayes

Don't let Gail Takahata's quiet demeanor fool you. This woman is truly a dynamo when it comes to helping cats - and she's traveled around the world helping save lives.

Gail has volunteered for multiple animal welfare organizations in the San Diego area, but first visited Best Friends Animal Sanctuary in 2006, and has since been a regular returning volunteer. In 2007, when Best Friends saved more than 850 cats from an institutionalized hoarding situation in Pahrump, Nevada, the rescue effort touched her soul and she knew she had to help.

Gail became an integral part of Best Friends' efforts in Pahrump, and though she's great with all felines, she specializes in the under-socialized ones. That connection still continues today. When visiting the Sanctuary, Gail always makes a point to go see former Pahrump cats, including Milagro. He has remained extremely shy over the past six years, always running when she (or anyone) approached. However, this time she got a surprise.

Recently armed with a jar of baby food, she entered his room. Initially, he stared down at her from the rafters while she petted the other cats. Imagine her surprise when she turned around and there he was - only a few feet away. The baby food bribery worked, and before long he had two paws in her lap.

"I was so happy I cried," says Gail who was overjoyed when she learned Milagro had been adopted. "Finally a forever home of his own." 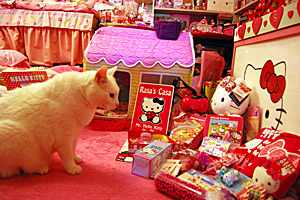 Speaking of forever homes, not surprisingly, Gail herself has adopted from Best Friends. But because Rasa has feline leukemia (FeLV), Gail had to provide separate accommodations for Rasa from her other cats, so the disease isn't passed to them.

To adopt Rasa, Gail and her husband converted a room in their home. However, there was one misunderstanding. The website accidently listed Rasa as female, so she decorated the room in a pink Hello Kitty theme. It turned out Rasa was male. However, that didn't matter; he instantly loved his room.

One non-Hello Kitty item did manage to find a way into the room. Gail also adopted Preston, another Best Friends cat with FeLV, so that Rasa would have a feline friend.

The Cat Whisperer in Japan

Gail is currently taking a hiatus from volunteering at Best Friends because she's helping cats in Japan. She had been reading the blog of one group and had wanted to help, but when she read about the group's founder becoming incapacitated with no volunteers, she took action. Despite the fact that she didn't speak the language, Gail bought a plane ticket, and within five days was en route to Japan. 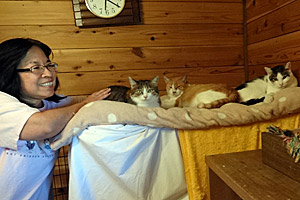 The organization is based in Inawashiro, Fukushima, Japan, and following the earthquake/tsunami in 2011, has been going into the nuclear evacuation zone to feed and rescue animals, caring for evacuees' pets, and practicing trap/neuter/return. Gail utilizes the skills she learned in Pahrump to help socialize the shy and feral cats.

"In Japan, a few people refer to me as the Cat Whisperer," says Gail, "because I have been able to transform so many shy and unsocial/untouchable cats into friendly cats in such a short period of time."

Because she can only stay three months at a time on a tourist visa, Gail is now in Japan on her third trip and plans to continue returning for as long as she can afford it.

"It's turned out to be the perfect volunteer assignment each time," says Gail. "Maybe it's because of my patience or calm nature that others think I can read a cat. I think it might be the opposite, that they are the ones reading me and can tell my intentions are just to help them. Whichever is the case, it's such an awesome feeling when the switch flips in their heads and they decide that humans are OK."

Make a difference for animals in your own community by volunteering.