Image
A cat who dislikes other cats so much that he will sometimes redirect his displeasure on people nearby is adopted by a loving couple.
By Jennifer Hayes

When you've got square pegs and a round hole, no matter how many times you try, the pegs just won't fit. That's the way George felt about his fellow felines. However, living at Cat World, home to roughly 700 Best Friends cats, it was difficult for him to avoid them.

Cat who isn't fond of other cats

George enjoys the company of people, even dogs, but sometimes his irritation at other cats got the best of him. If a cat annoyed him and a person happened to be nearby, from time to time, he would unintentionally redirect his irritation. Ouch!

When the new Cat World Headquarters opened last year, offering individual rooms for cats who don't get along with other cats, George was one of the first residents. 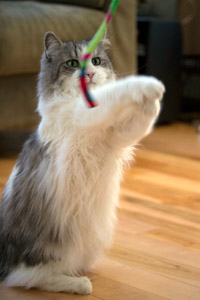 George's new solo space gave him the opportunity to shine.

"As much as he dislikes cats, he loves, loves, loves people and attention," says Cat World caregiver Beth Erdman. So she gave George just what he wanted.

In keeping with the success of some of the other Cat HQ residents, Beth started clicker training George. He took right to the challenge. However, there is a price to pay for George's consent … baby food.

When offered the proper incentive, he excels. He quickly learned to sit on command and lift his paw for a shake. Occasionally though, George tried to buck the system.

"Sometimes he'll do it readily," says Beth. "Then other times he'll look at me and just stare me down like, 'This is beneath me - just skip over this part and give me the baby food.' "

It was his "doglike" behavior, good looks, and long tenure at Best Friends that caught the attention of Jenny Dwyer of Bangor, Maine. She was preparing for her first trip to volunteer at the Sanctuary. She looked over the Best Friends website and was charmed by George from afar.

And fate intervened. On her first day volunteering, while Jenny was eating lunch with Best Friends co-founder Jana de Peyer, discussion turned to George. At that very moment, his image popped up on the lunchroom video screen. Coincidence or sign? Arrangements were made for Jenny to meet George face-to-face.

"My husband made me sign a contract saying I would not come home with any more dogs because we have five dogs," says Jenny. Lucky for George, Jenny's husband, Doug, forgot to include other species - like cats. And just like that, George was adopted. 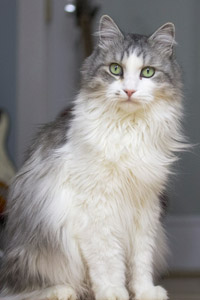 "What better place for this cat than with a bunch of dogs?" asks Jenny, who says there can be up to eight dogs on any given day at the office. They've been slowly introducing George to all the dogs, as well as the constructed raised walkways (should he wish to avoid canine contact).

So far, it's worked great. George has not shown any cranky behavior whatsoever. He actually remains laid back, even when the much smaller miniature dachshund Chloe holds him down with her paw to give him a thorough washing.

He may be the office cat, but Jenny and Doug now bring him home most nights and weekends, taking special care to keep him separated from their two other cats.

And Doug, who insists on no more pets, has become George's best bud.

"He seems so happy when he is snuggled in under Doug's arm on the bed," laughs Jenny. "He fits in perfectly like a piece of a puzzle. I don't think George has stopped purring since he got here."

Best Friends has many wonderful cats, like George, who are just waiting for the right home.