Cat's bone infection doesn't hold him back from a home

Image
Senior cat with dental disease and a bone infection is feeling better. His sweet personality and new, toothless smile wins him a home.
By Christina Green

Forget the toothbrush. Bodie’s dental disease had spread like wildfire through his mouth and called for a surgeon. When Best Friends–Utah took in the sweet senior from a local partner shelter near Salt Lake City, they thought the only thing standing between him and the perfect home was his mature age. Turns out, a bunch of rotted teeth and residual infection put a damper on things, too.

But, as is often the case with Baby Boomers, age is relative, and this tough cookie made the long journey to health like a cat half his age. His young-at-heart attitude also gained him a home in what just might be record timing.

Ironically, Bodie’s crooked, little soul patch of color on his chin drew attention to the one-and-only place on his 11-year-old body that required medical care. But it just wasn’t that obvious. Cats’ teeth are a little harder to examine than their canine counterparts. And Bodie’s breath wasn’t knocking anyone over.

And so, as he waited at a local shelter for someone to choose him for adoption — well, his teeth got worse. As time went by, no one realized sweet Bodie’s secret problem because he hid it well.

In fact, when shelter staff brought Bodie to the fall No-Kill Utah Super Adoption, a twice annual event that brings together adoptable animals from No-Kill Utah Coalition partners and animal shelters in one big festival, Best Friends–Utah staff thought he was just a lovely old chap. And they were happy to take him in at the Best Friends Pet Adoption Center for a fresh shot at adoption.

Not until Bodie arrived and underwent a full intake exam did anyone learn of the feline’s health issues. 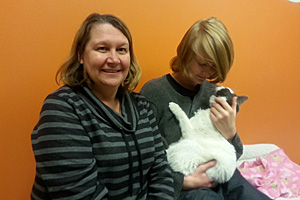 “We ran full pre-surgery blood work and determined that although he was at least 11 years old, he was healthy enough to get a full dental surgery,” says Spencer Conover, lead adoption specialist at the Center. So off to a local clinic he went for a full extraction. If only that was the end of it.

“During the surgery, the vet discovered that Bodie had a pretty bad bone infection in his lower jaw,” Spencer says, “most likely caused by the dental disease he had been battling for years.”

For nearly four weeks, Bodie stayed with Best Friends–Utah in the center’s isolation room, receiving antibiotics and pain medicine from caregivers until his infection cleared up.

After months in the shelter where he was passed up for adoption and more weeks of recovery, the time had come to unveil the new and improved Bodie smile.

The laid-back cat had barely sauntered out onto the adoption floor of the Best Friends Pet Adoption Center. And guess what? Just three days later he sauntered right off the floor and out the door with his new person.