Cats transported to Oregon to be adopted

Image
The Cat Adoption Team in Oregon puts out a call to rescue groups to send their healthy, adoptable cats to them since they have open cages.
By  Denise LeBeau 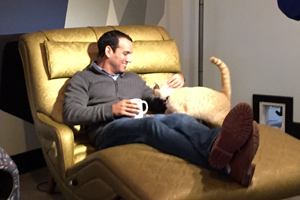 Wednesday, a buff-colored tabby cat, whiles away most days purring loudly on his new mom’s lap or planted firmly next to the computer keyboard. It’s hard to imagine anyone abandoning the affectionate cat with topaz eyes, but someone did. Recently, Wednesday’s fate turned around when he hitched a ride with Best Friends from southern Utah to Portland, Oregon.

Cat Adoption Team (CAT) has worked hard in the Portland metro area to spay and neuter cats. According to CAT, more than 50,000 cats have been spayed or neutered because of its efforts and those of partner organizations. As a result, the number of cats entering shelters there has declined. With fewer cats coming in, and adoptions staying strong, during a few months of the year, there are more adopters than cats — a great “problem” to have.

So Karen Green, CAT’s executive director, contacted nearby shelters and rescue groups to see if they could fill those empty spaces she had available for adoptable cats. But there was a problem. The cats had to be healthy and ready for adoption (spayed or neutered, vaccinated and tested for diseases) and local groups were not able to get enough cats vetted or arrange transportation to Portland. Since Karen didn’t want to see spaces for needy cats go to waste or have potential cat adopters go home empty-handed, she contacted Best Friends.

Lezlie Sage, Best Friends No More Homeless Pets Network specialist, was more than happy to work with CAT over time to help those local groups get to the point where they could provide the veterinary care required to get cats “adoption-ready” and able to travel across the state. But, meanwhile, potential adopters were waiting.

“At first I hadn’t considered taking cats from the Sanctuary itself,” says Karen. “But I know Best Friends has a variety of sweet, healthy cats.” The first transport was organized quickly, and soon a van full of ready-to-adopt cats was on its way from Best Friends to Oregon.

Purring all the way home 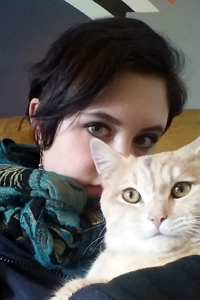 Wednesday, one of the first Best Friends cats to arrive in Oregon, was also one of the first cats to be available at CAT’s off-site adoption venue, a partnership with another local group, Purringtons Cat Lounge. That’s where Sierra Handley-Merk, who went there out of curiosity, met Wednesday.

“Wednesday had just arrived from Utah the day before,” says Sierra. “He came and hung around us for a few minutes and let me pet him.” The tabby became a bit of a legend around Purringtons during his short stay, especially after he stole a scone off a café guest’s plate and ate it while hiding under a chair. “I like that he's a little mischievous. It's a good personality trait in a cat,” says Sierra. So not long after his arrival, Wednesday was on the road again — this time headed to his new home.

Sierra says, “After a few days in my home, he’s completely opened up. He’s not shy at all about looking for affection or head-butting people.” Now, when the cute tabby isn’t snuggling with Sierra, he’s tearing around the house and chasing his many toys.

CAT, other local groups and Best Friends are working together to provide resources to smaller organizations in rural areas closer to Portland, so they can meet health requirements for adoption in larger adoption venues. In the meantime, each time a cat from Best Friends travels to the Northwest, it opens a space at the Sanctuary for another cat in need. It’s a win-win for everyone, especially for one buff-colored, scone-loving cat, who couldn’t be happier in his new home.

Photos courtesy of Cat Adoption Team and by Romana Hamilton