Cat's wheelchair gives him the freedom to run

Cat with feline cerebellar hypoplasia (CH), a neurological condition, gets a cool new wheelchair (cart) to help him get around.
By Christelle L. Del Prete

Duke has always been the kind of cat who will do whatever he can to overcome physical limitations. Since coming to Best Friends, he’s impressed and inspired everyone he meets with his can-do attitude and sheer determination. Though he’s needed lots of help over the years, it’s never dampened his independent spirit. And recently, Duke received a heartfelt handmade gift from a longtime Best Friends volunteer that has made his life even better.

A cat mobility cart is giving Duke even more freedom and independence than he’s ever had. Previously, medication, extra care and support from Cat World caregivers and volunteers enabled Duke to do many things he wouldn’t have been able to do on his own. But since getting the cat mobility cart, his life has gotten even better, because now he’s got his own set of wheels. 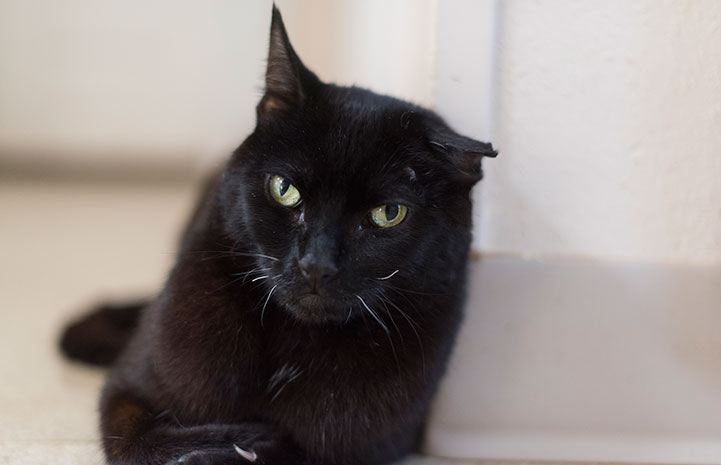 What is feline cerebellar hypoplasia?

No one knows what happened to Duke, who is now seven years old. He may have suffered a severe traumatic brain injury. Or he may have been born with feline cerebellar hypoplasia (CH), a neurological condition that prevents the cerebellum (the part of the brain that controls motor function) from fully developing. It’s often the result of the mother cat contracting distemper or parvovirus while she is pregnant.

While some neurological cats have just a minor wobble in their walk, Duke’s case is severe. Before he came to the Sanctuary, he was called “Flopsy,” because he used to have such a hard time walking that he would flop over onto his side. And he could barely stand up long enough to relieve himself.

Medications have helped to ease Duke’s pain so he can get around more easily and with less frustration. He also gets regular baths to help him stay comfortable and clean.

Duke also gets lots of love from his caregivers and Cat World volunteers. Kind volunteers take turns holding him upright while he eats and supporting him while he takes short strolls around the lobby of the building where he lives. Something about Duke makes him irresistible. In fact, some volunteers return to Cat World just to see him.

One of the many volunteers who fell in love with Duke is Cyndi Pearce. Cyndi’s been coming to the Sanctuary from her home in North Carolina for years, and she has a soft spot for cats with special needs — especially for Duke. Ever since she first met him, Cyndi has wanted to help Duke live the best possible life, so recently she decided to take an idea she’d been toying with and make it a reality.

“I did some research online about CH kitties and that is when I first saw a cart and some YouTube video of cats using them,” says Cyndi, who eventually found a video with a step-by-step guide to crafting a neurological cat wheelchair. “After my last visit to the Sanctuary in July I decided to try and make the cart, knowing that it may not be perfect but it would give Duke a chance to walk upright.”

At home in North Carolina, Cyndi got together with a handy friend, and together they assembled the cat cart out of PVC pipe and custom-fit casters (wheels). Then she picked out fabric to make a supportive sling for Duke’s body that attached to the cart with Velcro and could be removed for cleaning.

“The main reason for doing this for Duke was because I thought it would give him a better quality of life by getting him into a standing position and giving him the freedom to move from point A to point B without human assistance,” Cyndi explained. “He does an amazing job of getting around now, but I knew this could make him even happier.” 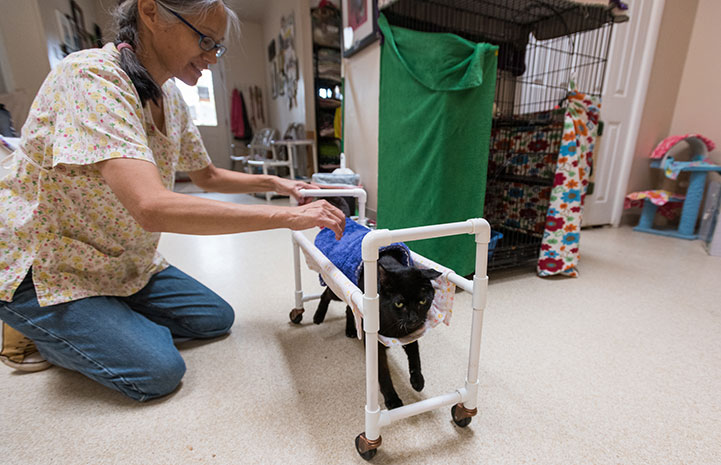 Neurological kitty gets wheels — and wings.

When Duke is placed in his custom-made wheelchair, his whole body is supported by the soft blanket and his legs hang down through holes. The ingenious cart holds him up high enough that his feet can touch the ground and he can put some pressure on them. That’s enabled Duke to finally stand on his own four feet and start building strength in his limbs. “It gives him an opportunity to develop that strength in his legs and hopefully make him more mobile over time,” explains Cyndi. “So the cart is kind of his version of physical therapy.”

But the best thing about the cart is that it's made this very special cat feel even better about life. He's even been testing out his running skills in the new cart. It’s as if, now, Duke not only has wheels. He has wings. 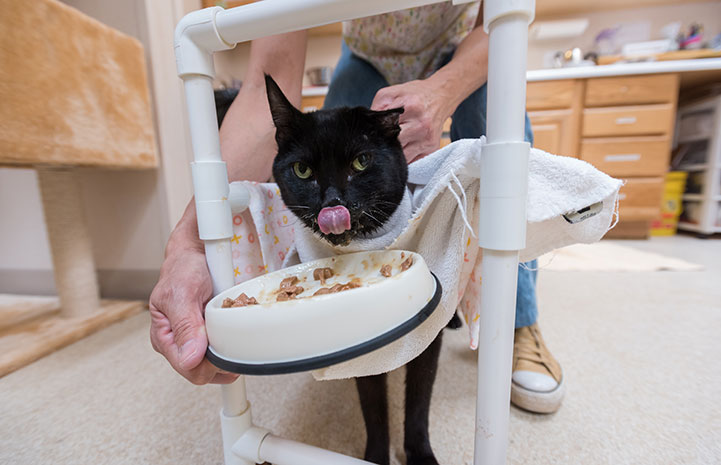