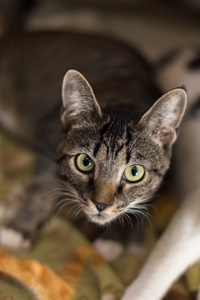 Because Bess and Bill have feline cerebellar hypoplasia (CH), they can’t climb or leap gracefully into people’s laps. They’ll never scale a cat tree or chase a string toy with ease. And they haven’t exactly perfected the stealth thing. But the sweet siblings deserve applause just for getting to their food and water bowls without falling. Because, every day, they’re proving that even tiny moves like these can be extraordinary.

When they were just over a year old, Bess and Bill came to Best Friends. The shelter they’d been living in didn’t have the resources to help pets with long-term special needs. Although cats with CH are born that way and do not get worse as they age, it is a lifelong condition. It happens when the part of the kitten’s brain that controls motor function (the cerebellum) does not fully develop — usually as a result of the mother cat contracting an illness like distemper or parvovirus while she is pregnant.

Cats with CH are sometimes affectionately called “wobbly cats.” The condition can range in severity from a minor wobble in a cat’s walk to extreme difficulty moving around. Bill and Bess aren’t at either of those extremes. As one Cat World caregiver puts it, the pretty brown tabby and the handsome tuxedo cat can get “from point A to point C, with maybe a minor stop at point B,” if that’s what they want to do. But, because they have a good amount of wobble in their walk, they do have significant challenges getting around.

Unlike most other cats, Bill and Bess have to think ahead and plan every move carefully — even if they’re just moving toward the litter box. Eating isn’t always a picnic (because of their head tics, they’ve spilled their food a time or two), and catching those pesky toy mice is difficult when your paw-to-eye coordination isn’t so great. Almost always, other cats have the advantage in playful wrestling matches or games of chase.

But when it comes to motoring through life, Bill and Bess have impressive skills. Once they’ve plotted a course across the room, determination rules. They lift and plant each foot strategically, aiming their wobbly bodies confidently toward their destination. And they won’t stop until they reach it, no matter how many times they fall along the way. 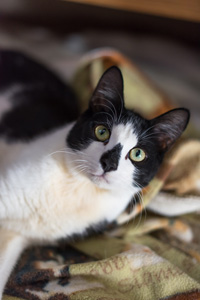 Perhaps that’s why they’re both so good at capturing people’s hearts. Or maybe it’s because they think every visitor to their building in Cat World is there to see them. Whenever someone walks through the door, Bess makes a beeline for that person, and Bill immediately sticks his head out of his tote to see who’s there. Then, when the visitor sits on the floor, Bess pulls herself over with her adorable white-tipped toes. Soon, she’s curled in her visitor’s lap, with Bill right behind her.

For most of our graceful, agile feline friends, these may seem like perfectly ordinary moves. But, by pushing past their physical limitations, and facing life with lots of spirit and determination, Bess and Bill make them extraordinary.

Help more special cats find their way in the world. Here’s how: