Image
Shy Husky who was chained up is rescued by Dogs Deserve Better and comes to the Sanctuary where she receives fostering, training and rehabilitation.
By Christelle L. Del Prete 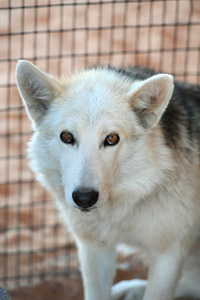 Beautiful Miska the husky still carries the scars of her former existence. The hair loss on the tips of her ears is the result of frostbite and fly bites, and her wary shyness is a consequence of severe under-socialization and neglect. For the first three years of her life, Miska was chained outside, with no shelter and barely any human interaction or care.

Luckily, the New Mexico chapter of Dogs Deserve Better (a nonprofit organization that specializes in helping inhumanely chained or penned dogs) rescued her from a property along with eight other dogs. At that point, Miska was so scared of humans, and so defensive around them, that she had to be removed with a catchpole.

Eventually, Miska came to Best Friends Animal Sanctuary and caught the attention of Pat Whitacre, one of Best Friends' most talented and beloved trainers. Pat had a particular knack for rehabilitating shy dogs. He knew that the striking, pointy-eared husky had potential but needed some serious help to come out of her shell. Pat worked on her socialization skills with both people and other dogs, and even took her home with him to see how she'd function in a home environment.

Though Pat passed away not long ago, Dogtown team leader Marla Browne has continued his work with Miska both at the Sanctuary and in other locations. In fact, since February of this year, she's made Miska her project dog. She's even fostering her, with the goal of helping her to become more comfortable meeting new people and accustomed to being in a home. At first, Marla feared that Miska would be terribly uncomfortable inside. She had never spent much time in the octagon in Dogtown, preferring to be in her outside run instead of in the building.

But, despite her wariness, Miska is quite curious and likes to check out everything in a house. Alternatively, she enjoys lying on her dog bed in the living room and just relaxing. Miska has even bonded with one of Marla's own dogs, and Miska does well with those at the Sanctuary. She often shares her octagon with a group of young, rambunctious dogs - she gives corrections and keeps them in line when they play too roughly. 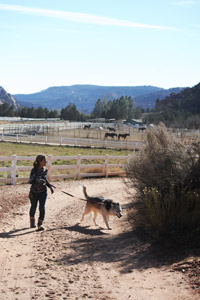 As far as meeting new people, Miska is still a work in progress, but the emphasis is on progress. Because of her fear issues, she will sometimes bark defensively or nip at the heels of a person she doesn't know. Complicating matters is the fact that Miska isn't especially interested in food - and, therefore not easily won over by tasty treats. And she's even less impressed by other things that could be used for positive reinforcement, such as toys, balls and leashes. So Marla and a trainer came up with another suitable reward for introductions - Marla herself.

Miska has come a long way from what she was - a dog so terrified that she couldn't be handled - and is finally beginning to blossom. Marla explains that, so long as people respect her space and are patient, Miska will come around and form strong bonds. She'll even lighten up a bit. "People won't see it right away," Marla says, but, once she relaxes, "she can be a really goofy girl."

To adopt Miska or another dog, go to the Adopt a Pet section of our website.