Fizz the cat has spent most of his life avoiding people. He lived in a terrible hoarding situation until he was two years old, and, when he was finally rescued and brought to Best Friends, Fizz wasn't ready to give humans a chance. So, he became a rafter cat. He loved to hang out on the wooden support beams in the Colonel's Barracks, the building where he resided in Cat World. Or, he'd climb up into the heights of the cattery for fresh air and a more scenic view. He just wanted to watch the world from above.

When Fizz finally came down, it wasn't by choice; he needed help. His surprised caregivers found him on ground level one morning, and they immediately knew that something was very wrong. Fizz was immobile, his back legs paralyzed. He was rushed to the Best Friends clinic, where the veterinary staff ran blood work, checked him for toxoplasmosis (a parasitic disease), and evaluated him for a thrombus (a blood clot). None of the tests was conclusive; it was clear only that he'd suffered a neurologic episode and that he had some undiagnosed inflammation. Fizz was given meds to reduce the inflammation and keep him comfortable, but there wasn't much else anyone could do but watch and wait. So, his caregivers brought him back to the Colonel's Barracks. 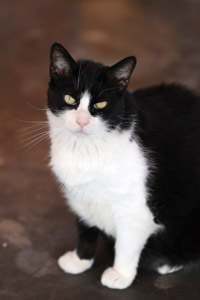 To prevent Fizz from trying to get back in the rafters, and possibly sustaining further injuries, his caregivers had him sleep in his crate that night. This sleeping arrangement was a far cry from the lofty perch he'd always enjoyed. At least he was back in the company of his feline friends, including Soxy and Adeleine. Both terrified of people themselves, these two cats did an amazing thing. They climbed down from the rafters and kept vigil outside of Fizz's crate all night.

The next morning Fizz's caregivers weren't sure whether or not he'd be able to come out of his crate on his own. But when they opened the door, Soxy and Adeleine ran right in and started licking him. No one knows whether it was the meds, Soxy and Adeleine's vigil, the loving care he received, or some kind of miracle, but, by the next night, Fizz was on his feet and walking again.

As a precaution, he was confined to ground level for a while. But, eventually, Fizz figured out how to get back up high, and he reclaimed his place in the rafters.

Fizz was, however, a changed cat. Not only did he become closer to Soxy and Adeleine, but his bond also deepened with two other cats, Chipmunk and Gumbo. These two also stayed close to Fizz and became protective of him. Caregiver Kelly Dudzik says that Fizz and Chipmunk have the deepest attachment, and that these two cool cats absolutely love each other. All three cats will often sleep piled on top of each other, as if they are kittens.

But the most remarkable change in Fizz is his interaction with people. Because his caregivers had to administer his meds, Fizz had no choice but to be in their presence. It wasn't long before he started allowing them to pet him, just a little. Now, he's figured out that he likes it, though he's not going to let on to his friends. So, he'll hiss a little when he's getting attention. He may be a rafter cat again, but now he'll venture down on his own every once in a while. That is, when he's not too busy running, climbing and jumping around as if nothing ever happened.

Adopt Fizz or one of the other cats here at the Sanctuary.