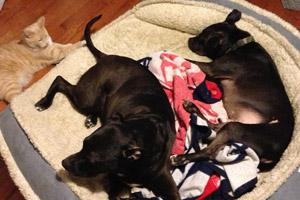 More about Cherry from adopter Paul:

What has surprised you most about Cherry the Vicktory dog?

One of the most surprising things to us is we really thought Cherry would get to a certain point in his rehabilitation and settle in and not change much after that. What we have found is Cherry continuously grows and overcomes the next obstacle in his way. It will be a lifelong journey for him, and he has days where he regresses, but eventually he moves forward. It has been an incredible journey watching him go from a dog who slept with his eyes open to a dog that we can call "normal." We know that isn't the most exciting term, but that's all he wants to be, a normal dog.

The other thing we have found really surprising about Cherry is that stress helps him learn and move forward. We all saw Cherry on "DogTown" and how shutdown he was. We didn't have a plan of how to handle his fame, but we weren't going to put him through public events if they didn't help him. The first event we took him to was a small, kids-only event. He was stressed to the max, and we stayed a couple of hours before sneaking out. 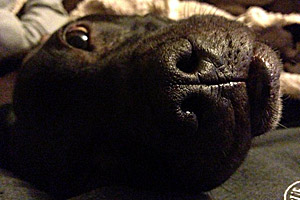 When we got home that night, Cherry took to his normal routine with much more confidence than we had ever seen. He was so full of himself. We thought, "Hmm ... maybe this is a tool we can use to help him progress." We were right!

At every event, we put Cherry in a positive, safe, yet stressful situation, but Cherry responded each and every time. It might not have been at the event, but he always took steps forward. It was a fine line to walk, but Cherry has grown leaps and bounds from it and has educated a lot of people along the way.

Today he loves events! He gets treats, does tricks for people, sits in their laps, and even kisses them.

There are a lot to list, but I think the one we keep coming back to is his eyes. His eyes are so expressive and can tell a story better than any book could. There are many days where Melissa and I come home after a stressful day of work, and Cherry can melt that feeling away in a heartbeat. He is such an amazing soul. He has impacted so many lives by just being Cherry. 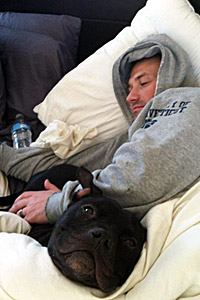 Cherry's favorite thing to do, without a doubt, is to cuddle. It doesn't matter if it's his mom, dad, his cats, or Madison, his canine sister. He just loves to cuddle. His favorite times are when the whole family is on the couch, in bed, or just lying on the floor. He takes advantage of each and every moment to share his love. Our favorite saying is, "He loves to be loved."

This is a tough question. Cherry has meant a lot to us. We cannot imagine our family without him. It's like adopting any other animal; they are family! On a more serious note, he has really provided us an opportunity to give back, to educate, to help our community. He allows us to tell his story to help other dogs like him. He has made us better people, a better family, and a better community. We have learned so much from him. That is what it is all about. We can all learn from each other, and we all can help each other become better people. We have helped Cherry through some tough times, but he has helped us too.

What do you think people can learn from Cherry?

People can learn about abused animals and that fighting dogs are not inherently evil dogs. Cherry was bred and trained to fight, and yet that is the last thing he wants to do. We think the bigger impact that people can learn from Cherry is that he doesn't look back. Cherry didn't ask to be in the situation that he was in, but he never uses that as a crutch. He doesn't look in the rearview mirror; he is looking ahead. I think humans can learn a lot from that. We tend to be victims and ask, "Why me?" Cherry just moves forward and makes the best of each and every day. We have been contacted by some amazing people who have had horrible tragedies in their lives and have used the story of the Vicktory dogs to overcome them. These dogs and the connection they have made with people are amazing.