Chicago bans the sale of dogs and cats

On March 5, Chicago, Illinois, became the latest city to ban the retail sale of dogs, cats and rabbits in pet stores, unless the animals come from shelters or rescue groups. In a show of solidarity for humane alternatives to puppy mills, the Chicago City Council vote was 49-1 in favor of the Companion Animal Protection Ordinance. "As a person who grew up with three dogs, I think it's the right thing to do,” said Mayor Rahm Emanuel after the vote. “While the city’s pets in need will be better off … so will the consumers. And I'm proud of the city and proud the city clerk took a step forward to do that." 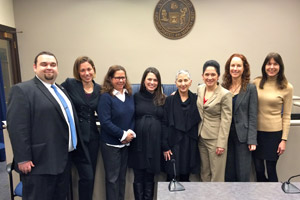 “This was a great example of the multifaceted approach we support to solving the puppy mill problem, and Cari Meyers of the Puppy Mill Project nailed every detail,” says Elizabeth Oreck, national manager of Best Friends’ puppy mill initiatives. Elizabeth cites the multipronged approach recommended by Best Friends: raising awareness through peaceful pet store protests, supporting conversion of mill-supplied pet stores to adoption models, educating the public, encouraging adoption over purchase, and advocating for legislation to help fight the cruelty of puppy mills.

In 2012, Los Angeles, California, the second largest city in the country, enacted a similar pet store ordinance. Elizabeth was on the frontlines there, and continues to work across the country to help other communities get on board. When Cari reached out over a year ago to ask for advice, Elizabeth was well equipped to help get the ordinance passed into law. “Cari and her team were very smart and strategic about working with the city council and raising public awareness about puppy mill issues,” says Elizabeth. “It was such a pleasure to work with them.  This topic can evoke a lot of emotions, but everyone on Cari’s team was consistently rational and reasonable when relating the issues to the legislators. I really admire what this small group of volunteers has been able to accomplish in a relatively short amount of time.”

Before Elizabeth testified in front of Chicago’s city council, she searched petfinder.com for the most common pets sold in stores: kittens and purebred puppies. In Chicago alone, and from just that one website, she found 13,000 kittens and 20,000 puppies available for adoption from shelters or rescue groups. There were hundreds of Yorkie, Pomeranian, and Chihuahua puppies, and other popular pet store breeds — all in need of good homes.

“What people have to remember is that this is not about putting stores out of business or displacing pet store employees. No one wants to see any businesses fail,” says Elizabeth. “We simply want to encourage pet stores to take a more humane and responsible business approach by offering rescued pets for adoption rather than puppies and kittens from mills. The Companion Animal Protection Ordinance will create another avenue for homeless pets to find their forever families and give folks an opportunity to adopt a healthy companion who is right for them.”

To let your elected officials know animal issues are important to you, join the Best Friends legislative action center.

Read ways you can help dogs in puppy mills.

Photos by Best Friends staff and courtesy of Elizabeth Oreck