Choosing the way to go

As she steps into the dog park, Louise, a little nervous, stands still while her caregiver attaches a long lead rope to her collar and unsnaps her regular leash. For a moment, she’s unsure what to do. But she watches her happy-go-lucky roommate and role model, Polo, leaping and bounding through the park. Taking her cues from him, Louise decides to relax and explore a bit.

Though the park is securely fenced in, Louise can’t be off her leash quite yet because it spans several acres and there are plenty of places for a frightened dog to hide. However, the fact that she walked all the way there from the building where she lives, and that she’s sniffing this and that instead of standing in one spot, shows the incredible progress she’s made since she came to the Sanctuary last March.

So simple yet so crucial 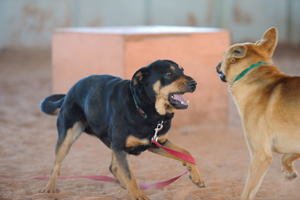 Louise and her sister, Thelma, didn’t have much human contact for the first few months of their lives. The two had to be trapped by animal control in New Mexico, and brought to safety at a local humane society. When the humane society didn't have the resources to give them the intensive socialization they needed, the siblings came to Best Friends.

Of the two, Louise struggled the most with something that seems so simple, yet is so crucial to a dog’s quality of life — getting leashed up. Teaching a dog to walk on a leash opens up a whole world of possibilities. Thelma, for example, could go for walks with volunteers, but Louise had to stay in her room or in her yard. The dog park was out of the question, since there was no way to get her there, and if she was let loose, it would probably be impossible to get her back.

What did the trick

Louise’s caregivers and trainers decided to employ a method that through the years has helped many dogs in Dogtown. They’d have Louise live in the Dogtown trainers’ office for a couple of weeks to get her used to being around people. That’s what did the trick. Trainer Allie Bender was finally able to get Louise’s collar on, attach her leash, and start taking her for walks.

Louise quickly realized that this was a momentous event. On one of her first walks, an entourage cheered her on. Strolling from Allie’s office back to her building on the other side of Dogtown, she was accompanied by a group of caregivers and other dogs. The short trip took a while, since Louise wanted to play with every dog on the way. Finally, she made it back to her room.

The beginning of everything 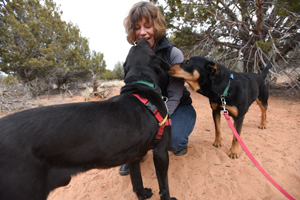 That wasn’t the end, but the beginning of everything for Louise. After overcoming the hurdle of being leashed, she now enjoys all kinds of outings. She goes for daily strolls with her best buddy Polo. She hits the trails with volunteers, and visits Dogtown headquarters to meet new people. She goes to Tara’s Run, the Sanctuary’s large training facility, for shy dog class, where she gets to play with lots of different staff people, volunteers and other dogs.

Louise is happy and excited to be out exploring her world. “This is the most fun she's ever had at the dog park,” Dogtown caregiver Paul Lindley says, as Louise leads him around the park on a beautiful Friday morning. “Before, she used to stay in one place and had to be coaxed to explore. Now she’s starting to enjoy herself, and is choosing the way to go.”

To bring hope and healing to more animals like Louise, become a Best Friends member.