Clicker and Parelli training for pigs

Image
The pigs at the Sanctuary excel at both clicker and Parelli training, learning desired behaviors and in return being rewarded with treats.
By Jennifer Hayes

It’s a known fact that pigs are bright. They are listed among the most intelligent animals on the planet — outsmarting even cats and dogs. But who knew some pigs at Best Friends Animal Sanctuary might have given Einstein a run for his money?

However, smart pigs without an appropriate outlet can get into mischief. So pig caregivers came up with a brainstorm. Why not try clicker training?

Clicker training teaches animals to perform a desired behavior by using positive reinforcement and a clicking noise. It doesn’t take long at all for the smart ones to determine that if they perform a particular task and hear a click, they get a yummy treat. Not surprisingly, they’ll keep doing it. 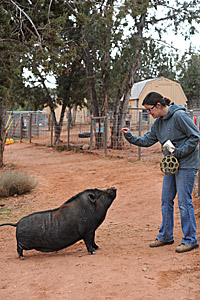 Piggy Paradise caregiver Adria Johnson started with Daphne the pig, and in only one afternoon of clicker training, the A+ student was rolling a ball around her enclosure.

“The thing with clicker training pigs is it’s extremely fast,” says Adria. “You have to really be on the ball.”

What happened the next morning, though, would astonish even the best of teachers. In an attempt to see if Daphne’s quick learning curve was an anomaly, Adria decided to work with Jack, who had been watching the previous day’s training session from the neighboring pen. She had to do a double take when she saw Jack immediately begin rolling the ball — without ever having received a lesson.

Adria’s husband, Christopher Young, sometimes works with Cherry during his lunch hour, and she too has learned to roll a ball and do other tricks.

Who knew that pigs would take to training like fish to water?

After Daphne and Jack were adopted, Adria decided to take on a bigger challenge. Much bigger. In fact, about 1,200 pounds big.

When Guardian Angel program alumni pigs Nick and Holly first arrived at Best Friends, they were adorable little piglets. Three years later, at roughly 600 pounds each, they’re still adorable, but not quite so easy to manage. The pair didn’t understand the concept of personal space, so clicker training could be a fun way for them to learn about it.

Nick and Holly excelled at their lessons. In fact, Adria once accidently taught Holly to stand on a bench.

With success under her belt, Adria decided to take it one step further. After watching the horse trainers at Best Friends develop positive relationships and behavior from equines through Parelli training, she decided to try it with Holly. 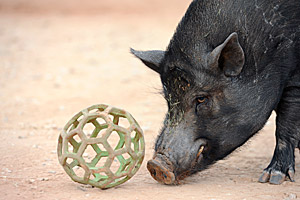 She found a pony-sized halter and made a fun game of putting it on Holly’s snout. Once she was able to tie it on, the horse trainers recommended teaching her to back up. Within 10 minutes, Holly was backing up 10 feet at a time. Now she not only backs up, but walks on a lead and walks forward when asked.

Adria feels a new connection with Holly, which she attributes to the Parelli training: “It’s building a relationship with her that she’s understanding. She has a lot more respect for me and boundaries. She doesn’t invade my personal space the same way she used to.” Now Adria can even give belly rubs simultaneously to both Holly and Nick, something unheard of prior to the training.

“We’re always game for trying new things and seeing what we can discover,” says Adria.

So what’s next on the horizon — training them to cook and clean? Probably not until pigs fly.