Originally a rescue from Lebanon, Rosha, a striking, longhaired calico cat, was adopted, but returned to Best Friends when her person went into assisted living. In the process, Rosha has put on a few pounds and is now on a diet. Luckily, Dr. Frank McMillan, director of well-being studies at Best Friends, has a few strategies for keeping her active.

Clicker training for cats is not a new phenomenon at Best Friends. Dr. Frank has had Raed, another Lebanon rescue, literally jumping through hoops for a while now. But for the past month, Rosha has been his star pupil; she is a super-fast learner and is very food-motivated. These qualities make clicker training feasible and fun for her. The idea behind the method is simple: an animal will repeat a behavior for which he or she is rewarded. The clicker is simply a tool to mark the desired behavior. Rosha will do what Dr. Frank has taught her to do because she knows she'll get a click and some tuna fish when she does.

Targeting with the hand 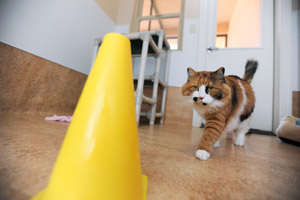 Dr. Frank began by "targeting" Rosha to his hand. When she touched his fingertips, he clicked the clicker and gave her a treat. He then taught her to touch her nose to a yellow plastic cone. Once she got that down, Dr. Frank began hiding the cone in various places in Rosha's room. Her new job was to find it, and, when she did, she would get her reward. Dr. Frank has also taught another cat, Skipper, how to do the same thing. "It's fun to watch cat(s), and to know what they are thinking," he says. "They are thinking: Where is (the cone)? I need to find it."

On occasion, when Rosha is either distracted, or stumped as to where he's hidden the cone, she will either sit and stare at him, or lick crumbs. At those times, he will offer her gentle encouragement ("Come on, this one's easy," or "Look to your left; you've got this."). If the clues don't help, he'll re-hide the cone in a more obvious spot. But she's gotten so good at this game that Dr. Frank often throws three other colored cones into the mix - orange, blue and red.

Rosha is, in fact, the first cat he has used all four cones on. He arranges them in a line in front of her and asks her to pick out the yellow one. If she gets it right, she gets rewarded, and then he switches up the order of the cones so she can do it again.

Though it's mainly a mental exercise, keeping Rosha walking all around the room could certainly help her lose weight. And, as she gets better and better at the game, he can make it more challenging to keep her brain engaged. 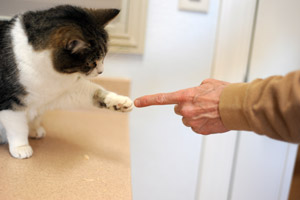 With other cats, Dr. Frank does variations on the theme. He demonstrates how agile Patches, a senior cat, still is by having her leap from table to chair to table across a conference room in Cat World Headquarters. And he shows how deaf cats can be trained using this method, too. Though Mocha, a Himalayan mix, isn't deaf, Dr. Frank is using hand signals and a camera flash to train him. (The hand signals replace the verbal cues, and the flashes replace the clicks.) Mocha has already mastered several cues, including "come" and "sit."

All the work that Dr. Frank is doing doesn't just benefit the cats while they are at the Sanctuary. It makes them more adoptable and provides them with an additional way to communicate and to interact with people once they find new homes. And, Dr. Frank says, it also shows people what they can do at home to keep their cats motivated and exercised.

Get more information on clicker training for your pets.