With more than 30 freshly neutered cats all crated and ready to be returned to caretakers, an unexpected glitch placed April Harris, director of Salt Lake County Animal Services (SLCoAS), in dire straits. During the short period of time between intake and discharge, it was discovered the residence actually housed in excess of 60 cats and was seized by the health department as a hoarding case. Making things that much worse was the fact that at 7 p.m. on a Friday night, there were few, if any, resources to help temporarily house the returning cats, much less the dozens more waiting at the property.

The strong working relationship between SLCoAS and Best Friends Animal Society–Utah gave April the immediate support she needed, as rescue team members went right to work finding a solution after receiving her phone call. Within two hours, a plan was in place: Build a temporary shelter, spend the next weeks aggressively hunting relocation sites, and transport as many cats as possible. In all, the shelter trapped what ended up being about 60 cats on the property.

Five temporary holding cages went up in a matter of hours that following Saturday morning, allowing the 30 recently neutered cats to be released after sitting in live traps for the previous four days. As many more poured in over the next week, it became apparent some sort of deadline had to be established for all the cats to find permanent relocation options; as such, SLCoAS set a two-week target date before those who remained would have to be euthanized. This was the last thing anyone wanted to consider, especially April, but the harsh reality of population versus resources made it a possibility. 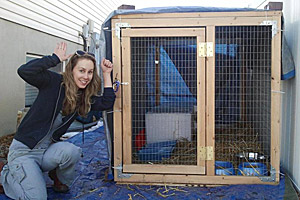 Jaime Aalen, community cat initiatives manager, explains the unique issues that make it such a challenge to rehome unsocialized cats, branding them one of the most euthanized shelter populations.

"Feral cats have virtually no options once they enter the shelter system; they are not used to human contact and thus aren't appropriate candidates for house pets. This is why we educate about and utilize trap/neuter/return (TNR) programs to humanely address the overpopulation problem. Relocation is always the absolute last resort unless it's a matter of life and death (which it was in this case); not only is the whole process extremely stressful for the cats, but it's also very time- and labor-intensive for the rescuers."

What transpired in the days following that November Friday night was extraordinary. Community members and volunteers helped spread the word via social networking, which led to a slew of assistance offers from far and wide. Meanwhile, the small staff worked through rain, snow, mud, cold and darkness to erect relocation cages and travel to some extremely rural locations to ensure the cats had a shot at life. In the end, all 60 were safely placed in happy, new homes just in time for Thanksgiving.

Their work is not done, though. Best Friends–Utah could really use your help with ongoing work the team does with other shelter partners in similar circumstances, such as identifying relocation sites for feral cats, assisting with constructing relocation enclosures, and coordinating TNR runs. Please email UtahTNR@bestfriends.org or visit the website for resources about feral cats and how to implement TNR in your community.