Image
Caregivers help nervous Congo African grey parrot, who used to pluck her feathers, relax, and she now has grown her feathers back.
By Christelle L. Del Prete

Imagine feeling so stressed out that you resort to pulling out all of your hair. Charlie is a Congo African grey parrot who does just that - except, of course, she has feathers, not hair. There probably wasn't anything specific that caused this anxious behavior; she's just always been a nervous Nellie. 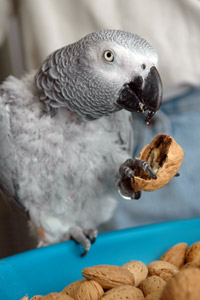 Jacque Johnson, manager of Parrot Garden, says Charlie is "extremely phobic," meaning she is very sensitive to changes in her environment, and she is very scared of new things. It didn't help Charlie's emotional state when her person, whom she adored, fell ill.

Congo African greys are extremely intelligent birds. Research reveals they have the intelligence level of a two- to five-year-old child, as well as an impressive vocabulary and the ability to use words in context. They also form very tight bonds with humans. That's why every time her person had to go away for long periods of time to get chemotherapy, poor Charlie would get very distressed. Then she would pluck out all of her long, grey feathers and end up with nothing but a bit of fluff. Or, worse, she'd pick at herself until she was completely naked.

So, several years ago, Charlie came to Best Friends and became one of the animals featured in the Guardian Angel section of our website. It's a place where we tell ongoing stories of several of the special-needs animals being cared for at the Sanctuary.

In Parrot Garden, Charlie's caregivers immediately set to work figuring out how to bring her anxiety level down. They tried various things: introducing her to other feathered friends, letting her stretch her wings outside of her cage, and giving her some time in quiet foster homes. But Charlie kept plucking out her feathers until she was just a little ball of fluff.

Because she just doesn't adapt well at all to changes in her environment, Charlie's caregivers finally decided the best way to keep her calm and happy is to keep her surroundings as consistent as possible. This includes the environment inside her cage as well as what surrounds it. 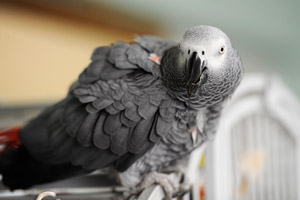 Because her caregivers have been so attuned to her sensitivity, Charlie is finally starting to relax. In fact, she's got a full coat of feathers for the first time since she's been at Best Friends. Not only can Charlie start strutting her stuff for her caregivers, but she can also show off her lovely feathers to potential adopters. Now that's something to talk about.

You can become a Guardian Angel. Your monthly gift helps ensure pets like Charlie get all the care they need. Learn more about our Guardian Angel program.

Read another story about a feather-plucking parrot.