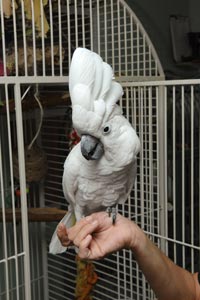 When Sandy Walton came to the Sanctuary back in September, she didn’t know if she wanted to take home a bird. And she certainly didn’t think she’d be bringing home two. Just a few months earlier, she’d lost the Moluccan cockatoo she’d cared for and loved for 20 years, and wasn’t sure she wanted to jump right back in and adopt another one. But she hadn’t met TooBird and Keno yet.

Having cockatoos isn’t for everyone. The birds have strong, bold personalities. They are very vocal and can be quick to change their minds. “In the wild,” says Parrot Garden manager Jacque Johnson, “cockatoos are never alone. So they expect their people to be with them all the time.” Without enough human interaction and mental stimulation, the birds can become destructive. But cockatoos can make great companions for the right people. Pairing birds with the right people is a little like making magic.

Falling in love with two birds

It’s people like Sandy who have the ability to build successful relationships with cockatoos. “There wasn’t much in the way of education or resources for first-time bird owners 20 years ago,” Sandy says. But during the time that she lived with her Moluccan, she managed to educate herself and figure things out. In the process, she became bird-savvy and understands what makes birds happy.

So when she and her husband, Darrin, visited the Sanctuary, they were drawn to the big, bold, beautiful cockatoo residents. But they were each drawn to a different bird. Sandy fell in love with TooBird, a 13-year-old umbrella cockatoo, and Darrin was smitten with Keno, a 40-year-old Goffin’s cockatoo. 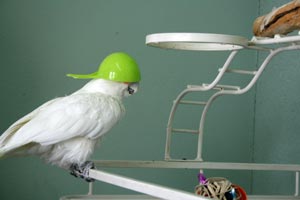 TooBird’s mellow personality appealed to Sandy and reminded her of her beloved Moluccan. And silly Keno — who loves to play with cups and somehow managed to get one on his own head, backwards-baseball-cap style — won Darrin’s heart. This made sense because Sandy has a mellow dog at home, while Darrin’s dog is much more playful. The Waltons knew the characteristics that they loved most in their pets, and TooBird (now renamed Jasper) and Keno fit the bill perfectly. It was almost as if the birds chose them.

Prioritizing personality and ensuring the right fit helped make the adoption a success. “We went for the birds that best suited our family,” Sandy says. “And it's working out wonderfully.” In the nearly two months they have been home, Jasper has found his voice and made himself comfortable. He likes to snuggle under the blankets and watch TV with Sandy, and will perch on her knee while she's eating.

As for Keno, if he feels he’s not getting his fair share of attention, he'll fly over to Sandy or Darrin, bop around to make sure he’s getting noticed and then cuddle up with them. Once, when Darrin was lying on the floor, Keno jumped down from his cage and hopped over like a bunny to check him out. Then he snuggled up under Darrin’s arm. A little while later, he hopped across his chest and then perched on his toes. And that’s how they stayed that evening, hanging out and watching TV together.

Jasper and Keno picked the right people, and Sandy and Darrin opened their hearts to the right birds. And the result is one happy household.

To help more animals like Jasper and Keno go from homeless to home, become a Best Friends member.