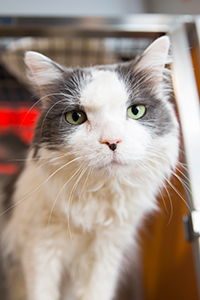 Gary, a mature, grey-and-white cat, didn’t look cranky at all. But he sure acted grumpy. If he could shake his fists and yell, “Get off my lawn, you kids!” he would. But he couldn’t. So instead he would hide away in his little den at the Best Friends Pet Adoption Center in Salt Lake City, Utah, and swat at the hands of anyone trying to help him.

But Best Friends–Utah staff had seen his ornery kind before. And Cathy Overfield, an adoption special at the center, had a hunch that a real love bug lay hidden beneath his prickly personality. How right she was. Today, Gary is almost unrecognizable from his former sullen self.

A reason for this cat to be cranky

You’ve seen the characters before — from the Grumpy Old Men series, to Carl, the old man from Pixar’s Up. Entertainment abounds with, well, grumpy old men who are still absolutely loveable. And there’s always a reason for their surly attitudes.

Gary had his, too. A sudden influx of extended family, which included young kids moving into his normally quiet home, overwhelmed him. That’s when his grouchiness started. He took to hiding from everyone. That’s when he lost his home and ultimately landed at the center.

And, boy, did Best Friends staff get a good glimpse of his unhappiness.

“We tried putting him in the cat colony room which started off OK,” says Cathy. “But within 24 hours we saw him sitting on the bench, scowling at everyone in the room. He was much happier tucked away in the cat towers.”

Clearly, it would take a special family to help Gary live happily. But, as Best Friends has seen time and time again, there is a family for every pet.

A key discovery about a cat

Sometimes it’s all about technique. Gary made it crystal clear he did not want any hands close to his head. That made plenty of people nervous about trying to pet him at all. But as Cathy discovered, his body, well, that was a different story.

“When I would clean his kennel, I would give him wet food and then stroke his body,” says Cathy. “I had to do this continuously. He would smack my hands and not let me clean unless I would pet, pet, wipe, pet, pet, wipe.”

Slowly, things started to change in good ol’ Gary. He started showing excitement when Cathy came around, happily kneading his blanket and chatting with her while she cleaned.

His timing couldn’t have been better, because love had been waiting for just the right moment to bloom. 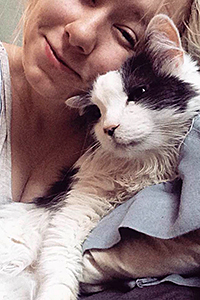 One day Cosette Robinson came to the center asking about Gary, whom she’d seen online. Everyone held their breath as the two met for the first time, but it all went well. And with each visit thereafter, the developing friendship between the two grew.

“I visited Gary for several hours over the course of two weeks,” she says. Cosette decided she could relate to Gary’s need for ample personal space at times and took the plunge. “When I finally decided to adopt him, he had begun to warm up to me.”

At home, Gary has fully shed his crotchety ways. Underneath that gruff exterior lay hidden a true snuggle monster. Cosette says he loves nothing more than to nuzzle up to her and chat away.

“Now that he's home, he has been the most delightful cat I have had the pleasure to meet. I have gotten him registered as an emotional support animal, and he has done wonders for my chronic anxiety,” she says. “And I like to think I've helped him with his anxieties as well.”

Everyone who knew the old Gary would agree that she has.